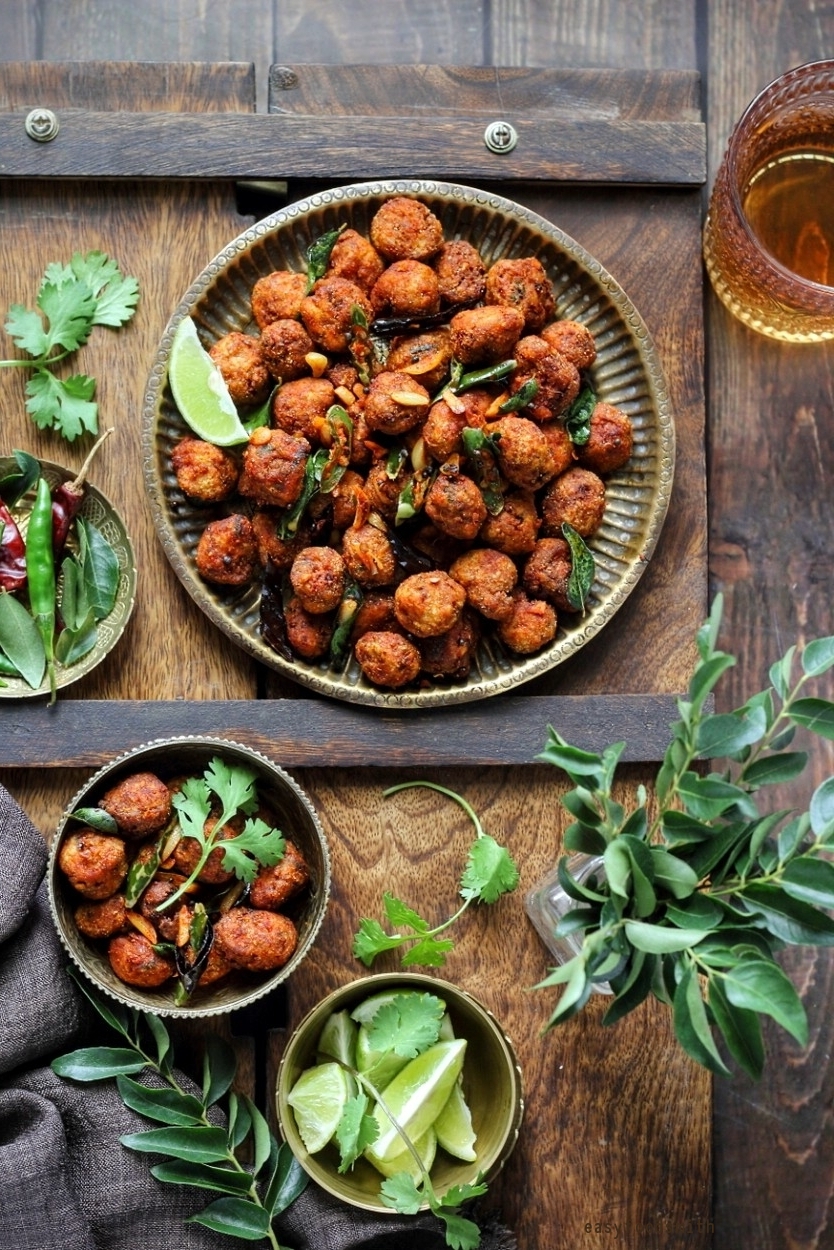 The credit for creating this dish (well, not this dish coz it was actually Chicken 65 and not soya) is given to the Hotel Buhari in the erstwhile Madras (now Chennai) in 1965, hence the figure 65 assigned to the name of the dish. Although there are many theories, some of them pretty bizarre, that are attributed to why the number 65 figures in the name of this dish but this is by far the most accepted and credible one.

It is a hot and spicy, deep fried dish that is served garnished with fried green chilies and curry leaves to lend it the classic south Indian flavour profile. There are several variations to this dish where one can see ketchup and soya sauce also being added to the dish to give a mix of sweet umami kind of flavour.

This dish was served as an entrée by the Hotel Buhari but you can enjoy it even as a side dish with curry, rice and roti. Or serve it as snack / starter with cocktails and drinks for parties and game days. It is best served hot and fresh so that you can enjoy the crisp texture of the dish, although it tastes good even when reheated or served at room temperature but it will lack that crispy fried goodness. Therefore, serving it right off from the frying pan and onto the plate is the best way to enjoy it.

Since soya nuggets are a rich source for protein therefore when I became a full-fledged vegetarian, I started incorporating it in my diet more often. Soya nuggets and even soya mince/ soya granules comes close to meat in their texture and slightly, even so, in their taste. You can replicate this dish using chicken, tofu or paneer and cauliflower too.

The recipe is simple where you just need to marinate the boiled soya nuggets with ginger garlic paste and spices, coat it with rice flour and corn flour and then deep fry it or perhaps you can do it in your air fryer (I don’t own one so I have yet to try this method) and then adding a tempering of garlic, green chilies, Kashmiri red chilli powder and curry leaves before you serve it. Serve it along onion rings and lemon wedges. 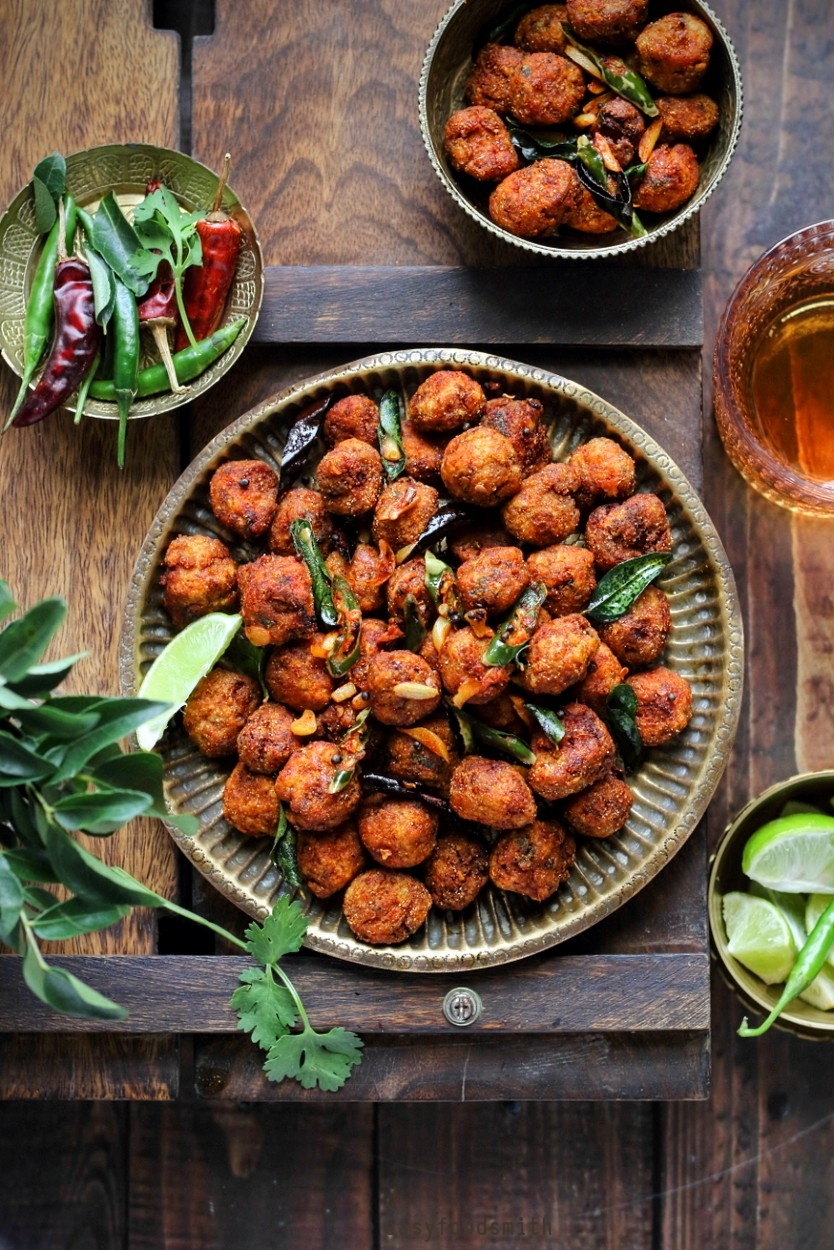 ½ tsp Chili powder (mine is hot and this much sufficed)

Salt to taste (I used half a teaspoon) 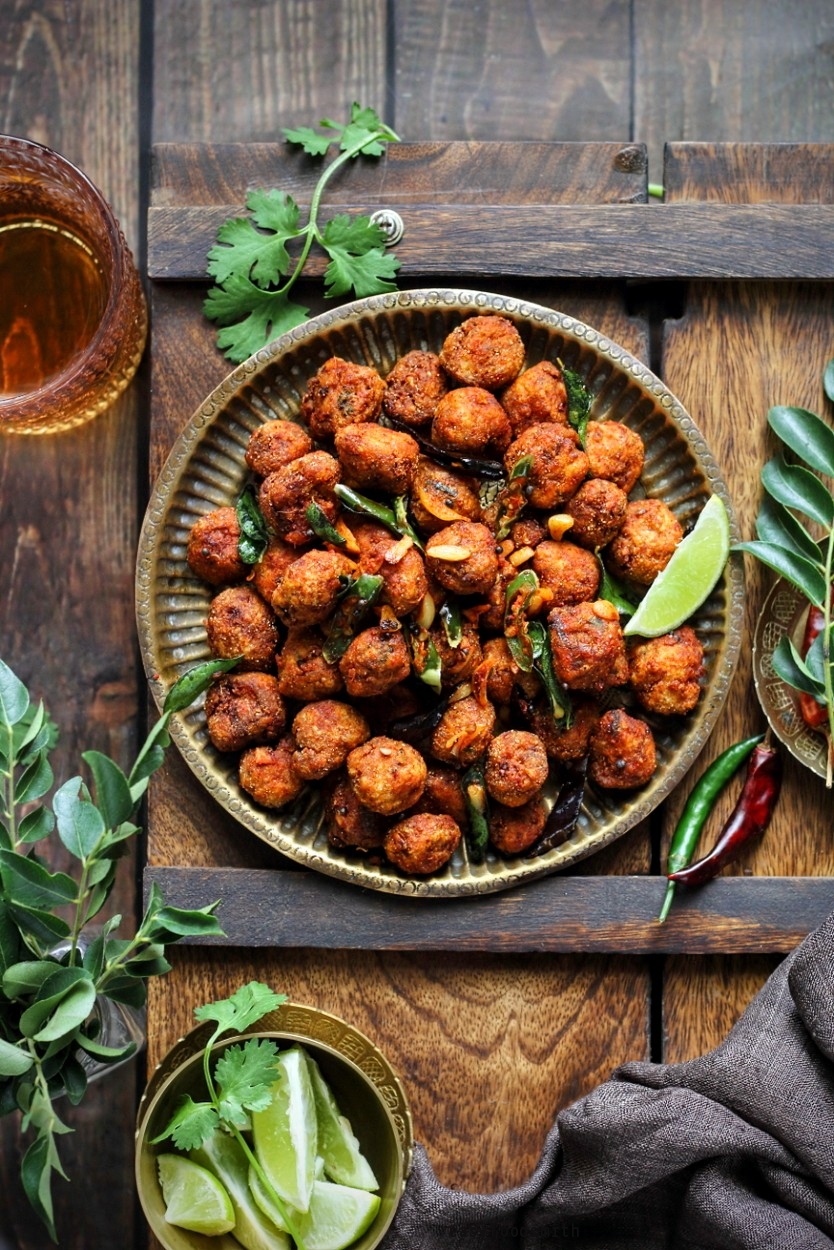 3 Green Chilies, sliced diagonally in 3 to 4 pieces or sliced in two halves length-wise 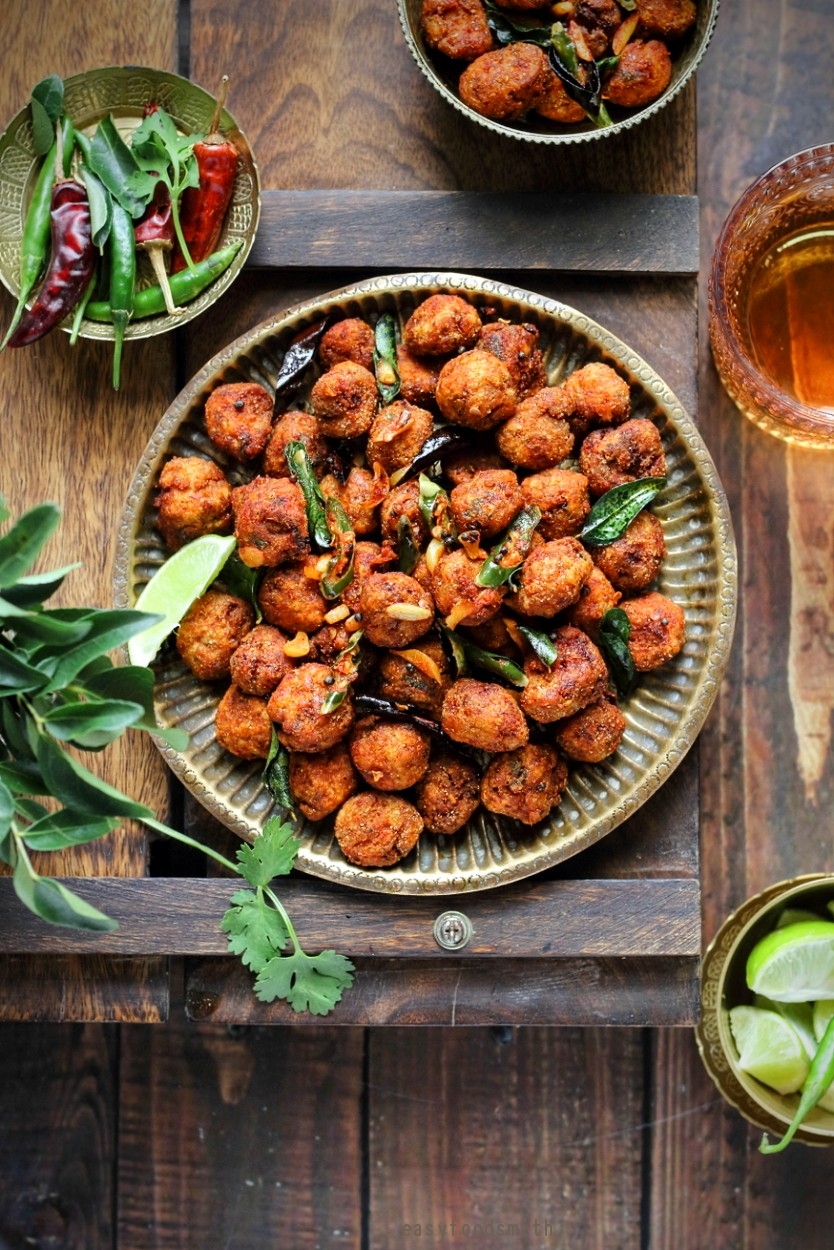 Boil three cups of water in a saucepan and add the soya nuggets to it. Cook for five minutes and then switch off the heat. Let it sit for a minute. Drain the water and wash the nuggets four to five times in clean water. Squeeze the nuggets to remove excess water. Ensure that you squeeze them well else any excess water to spoil the marinade.

Take the yogurt in a mixing bowl and add lime juice, ginger, garlic, chili powder, degi mirch, black pepper powder, cumin powder, turmeric powder, coriander powder, salt and finely chopped curry leaves. Mix everything together and add it to the soya nuggets. Ensure that the soya nuggets are coated well by the marinade. Keep aside for twenty minutes to half an hour.

Heat the oil in a frying pan or wok. I used a small wok for frying the nuggets so one third cup oil was sufficient for me. As such once you are done frying the nuggets, the oil cannot be used for any other purpose so use less oil to avoid wastage.

Fry the nuggets in hot oil, in batches, till they turn crisp and golden brown in colour. (be careful not to go overboard else they will burn) It took me a little over two minutes on high heat (two minutes and fifteen seconds to be precise). Ensure that you frequently toss around the nuggets in oil for even frying and browning. Remove the fried nuggets on an absorbent sheet / kitchen tissue. Set aside.

Before we proceed to temper the nuggets, whisk together the yogurt and degi mirch along with two table spoons of water and set it aside (both ingredients are mentioned under the tempering caption)

For tempering, heat the oil in a frying pan or wok and add mustard seeds. Once it begins to crackle, add the dry red chillies followed by garlic, ginger and green chillies. Keep tossing the ingredients around to cook evenly and to prevent them from burning.

Once the garlic just about begins to turn golden, add the curry leaves and fry till the garlic turns golden and the leaves turn crisp.

Add the yogurt–degi mirch mix and cook for ten to fifteen seconds. Add the fried soya nuggets and toss everything together till the nuggets are coated nicely with the tempering. Decant the contents in a serving bowl and serve immediately along with sliced onions and lemon wedges. 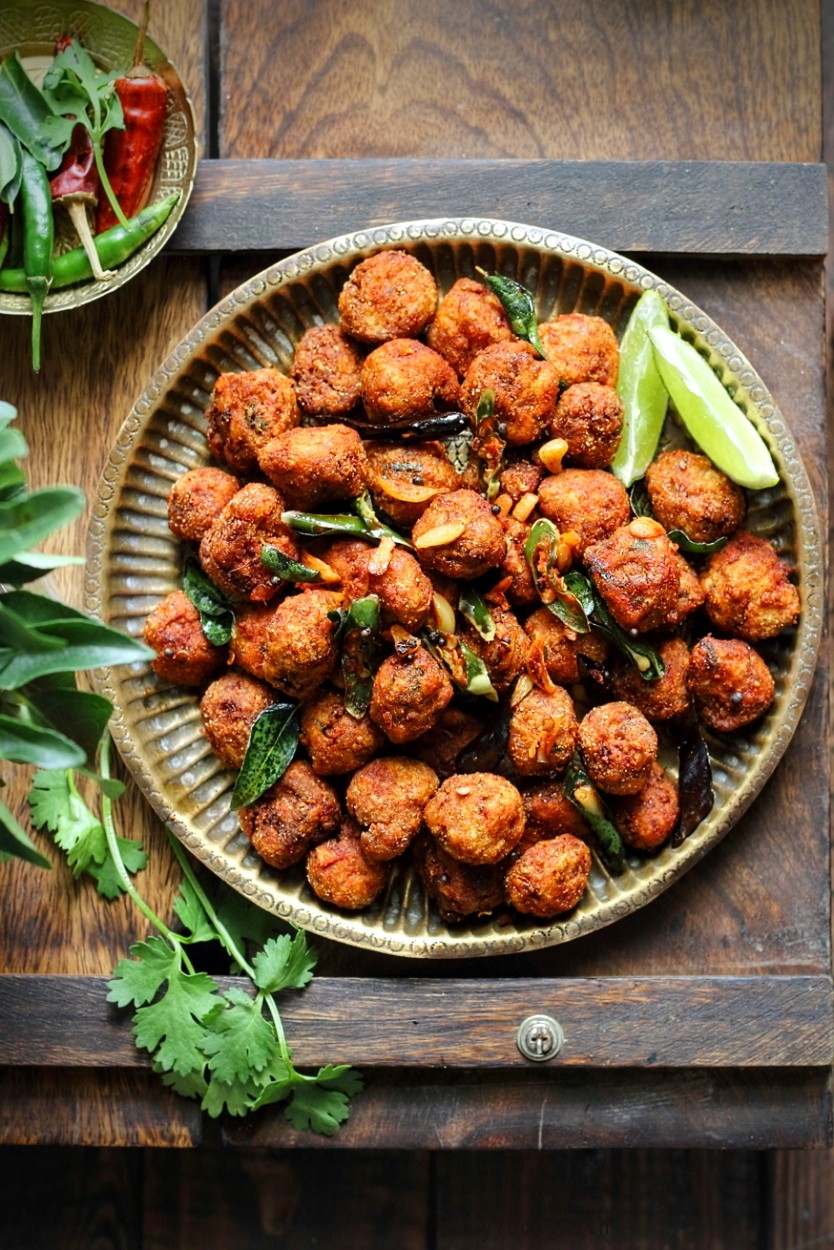 Thank you so much for your visit and see you again with another exciting recipe!