“Try new recipes, learn from your mistakes, be fearless and above all have fun.”

Cakes with healthier options are a huge rage; vegan, gluten free, certain grains free, sugar free, flourless, so on and so forth. This option is sometimes by choice and sometimes for health reasons. For me this is purely by choice and a conscious one. Since a few months I have been experiencing this acute craving for something sweet to end my meal with. I was one person who took great pride in the fact that I did not have an addiction for anything, what so ever. But of late I was finding it hard to kick this urge and I would invariably go and grab a gulab jamun or a rasgulla or have a few spoonful of halwa. These sweets are fine to have once in a while but to my utmost horror I find myself becoming a slave to them! I knew I had to do something about it. And then the other day I read somewhere about the sugar addiction being the worst of all addictions (mind you, it included smoking…no kidding) and the toughest to get rid-off. For a person who has a preference for savouries than sweets, it is something that I am finding hard to accept. Till the time I am able to muster enough willpower, I can at least switch to something healthier such as opting for whole wheat flour (aata) instead of all purpose flour (maida). In fact during my initial years of blogging I had posted a delicious & healthy cake with wheat flour that has a beautiful texture which is moist and soft; thanks to the carrots and dates. Later I made these insanely good Fudgy Brownie Besan Cookies.

Swapping sugar with a healthier substitute was my second thought and obviously jaggery comes to mind first, especially if one lives in a state that is the highest producer of jaggery in India. I remembered seeing a cake few years back on NDTV that was made with jaggery, which at that point of time, I didn’t pay much attention to. But I knew that now was the time to whip up a cake with jaggery. I have used the NDTV recipe along with my Choco Chip Zuchhini Oats Bread as my referrals. I started with some brain storming and asked my husband for some inputs about it. But instead of giving me some idea, he looked appalled (he never said anything) at the thought of me baking a cake with jaggery! Poor soul, who could blame him! The desi boy had grown up eating very basic and humble vanilla cake and it was much later, post our marriage, that he was ushered into the world of Banana Cake, Carrot and Dates cake, Lemon Cake, Coconut &Pineapple Cake and many more. At the end of our conversation, all he said was, I hope it doesn’t feel like one is eating Atte ka Halwa! Quite a dampener I say! 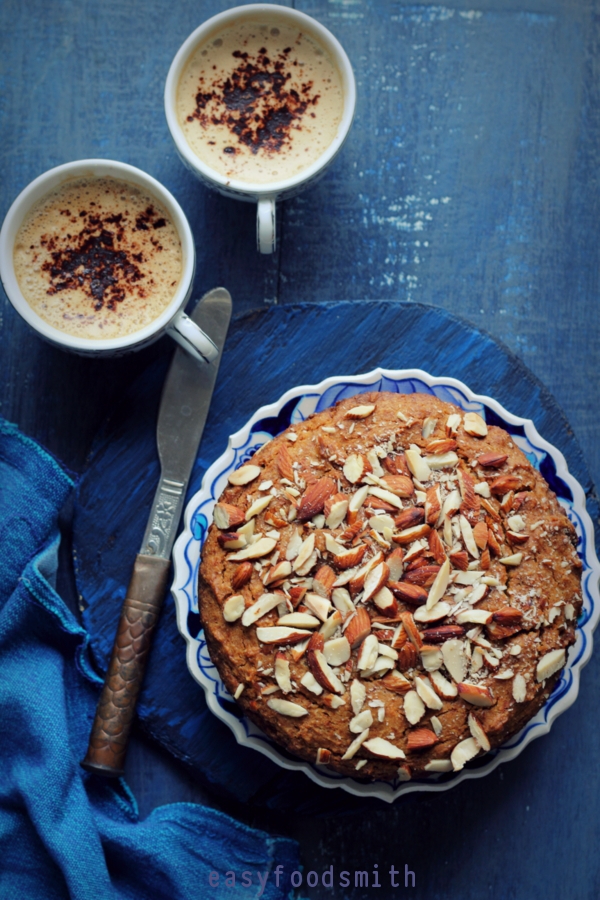 His words kept ringing in my ears while I was grabbing the ingredients and hoping fervently that this does not turn out to be a halwa indeed! I knew some tinkering was in call. A month back I had purchased date palm jaggery, a seasonal ingredient made only during the winter season, and I thought of using that instead of the regular jaggery. It is extensively used in Bengali sweets (during the winters only) and has a beautiful refreshing fruity kind of sweetness unlike the intensely overpowering sweetness of regular jaggery. A confectionery shop near our house sells a Bengali sweet that combines coconut and date palm jaggery and the result is heavenly. I thought of doing the same with the cake and added some desiccated coconut and coconut milk to replicate the flavors. I am so glad it turned out well and though reluctantly, hubby did admit that this was a cake to reckon with. Check out the benefits of jaggery here

1½ tbsp Almonds (to garnish on the top) 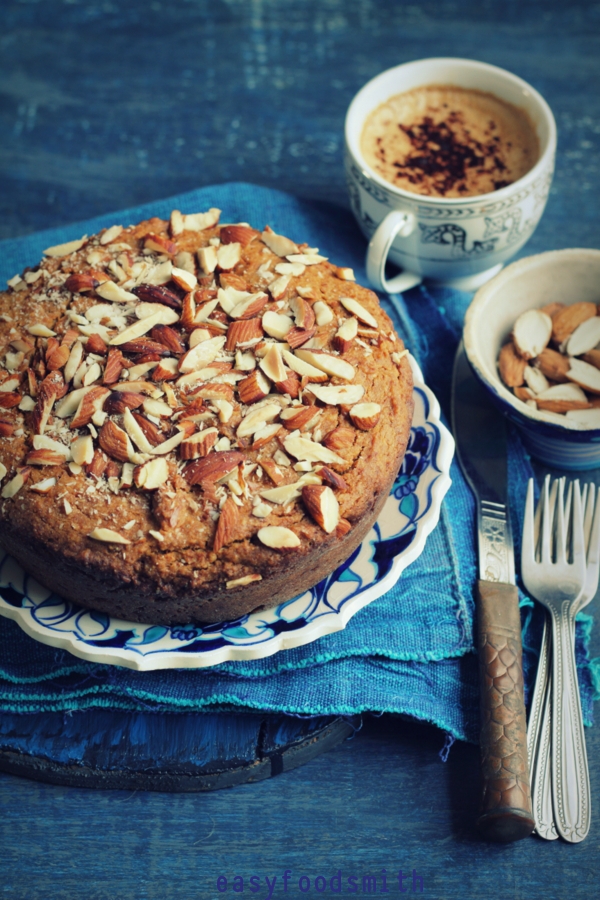 Prepare a 6 inch baking tin by lightly greasing and dusting it with flour. Set aside. (mine was 6½ inch cake tin but if you don’t have that, a 6 inch one would do just fine)

In a heavy bottom small pot or pateela add the coconut milk and jaggery. Heat the milk on very low heat, stirring all the while, till the jaggery just melts. Switch off the heat and allow to cool.

Roughly chop the almonds and set them aside.

In a mixing bowl, pour the oil and jaggery milk. Add vanilla essence and whisk for half a minute. Add in the flour mixture and mix till just incorporated. Sprinkle the top with the roughly chopped almonds.

Bake in the oven at 170 degrees C till the skewer inserted in the centre comes out clean. Allow to cool in the pan for 5 minutes. Run a knife around the edges and turn out the cake on wire rack. Allow the cake to cool completely. Serve with the beverage of your choice and indulge guilt free.

Update: In case the cake begins to brown on the top but is still undone in the centre, cover the top gently with foil and bake till it is done. 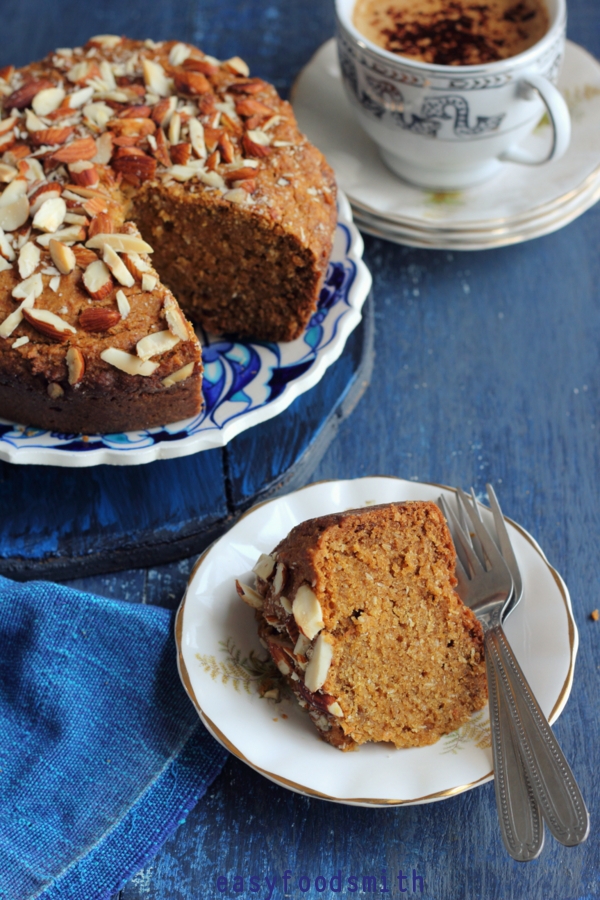 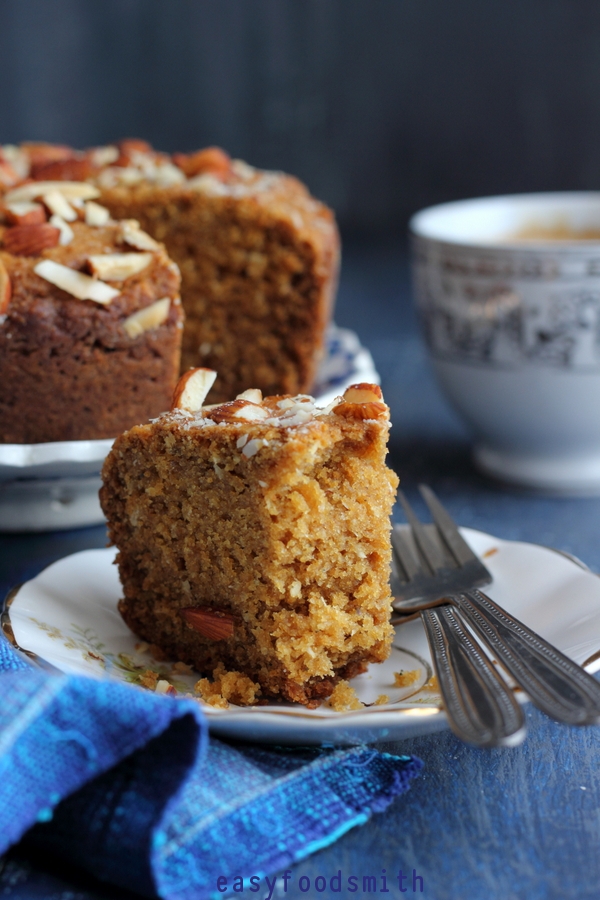