Skip to content
It was the fame of India’s riches and that of its spices that brought merchants and crusaders to its shores and changed its course of history. An Indian kitchen will typically have an array of spices that an Indian housewife will use in a variety of forms- whole or ground, toasted or fried. The spices form many parts of a plant – fruit, leaves, flowers, bark, roots, resins, etc. When combined, these spices create a symphony of flavours on the palate. The spectrum of spices is vast and so is the style of cooking; each state or region of India having its own set of favourite spice or mix of spices. Nearly all the spices mentioned here are the ones that are used across the country but their usage varies.
JEERA
Cumin Seeds 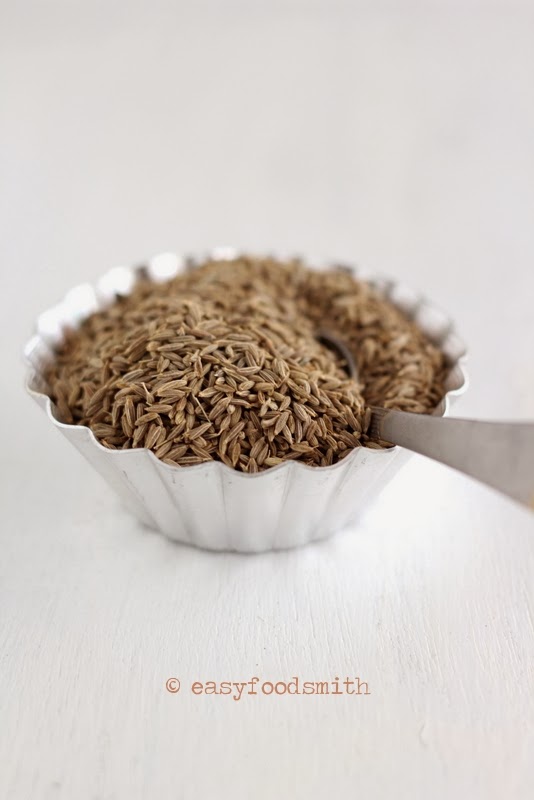 Cumin is essentially the most commonly used spice. It is used in most Indian savoury dishes, whole or ground, fried or roasted (both treatments lend a different taste). It is a robust spice and has layers of flavours – warm, smoky, bitter and nutty. Its warm earthy aromas become more pronounced when roasted. I love the flavor imparted by roasted ground cumin to the chicken or lamb curry. It is believed to aid in digestion. It is also added to the panch phoran mix which literally translates to five-spice mix. (I used the panch phoran mix to make this yummy Tomato Chutney) Sprinkle a generous pinch of roasted and ground cumin to raita and see the difference. Also, Jal Jeera, a very popular summer cooler in northi of India, uses roasted cumin.
SARSON
Mustard Seeds 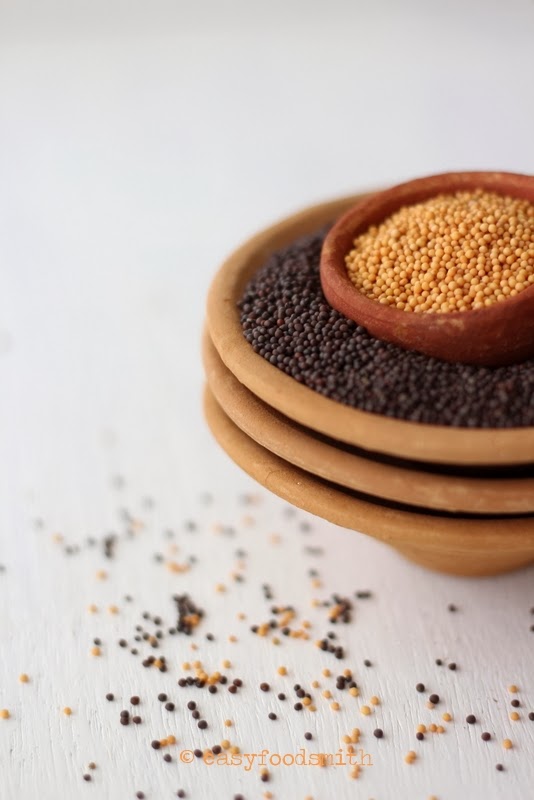 Mustard seeds are derived from the mustard plant (belonging to the cruciferous family), a popular green leafy vegetable in Punjab called Sarson da Saag. The seeds are pungent with hints of nuttiness. The commonly used black variety has stronger and peppery flavour and used for tempering and also added ground, to pickles. They also happen to be one of the spices added to the panch phoran mix. The seeds are pressed to derive Mustard Oil which is used extensively in the north, west and a few eastern regions of India.

The milder yellow variety is usually used for curries and is extensively used in the eastern states of India. The seeds are powdered, made into a paste adding water and lightly fried in oil. It makes the base for vegetable and fish curries.
METHI DANA
Fenugreek Seeds 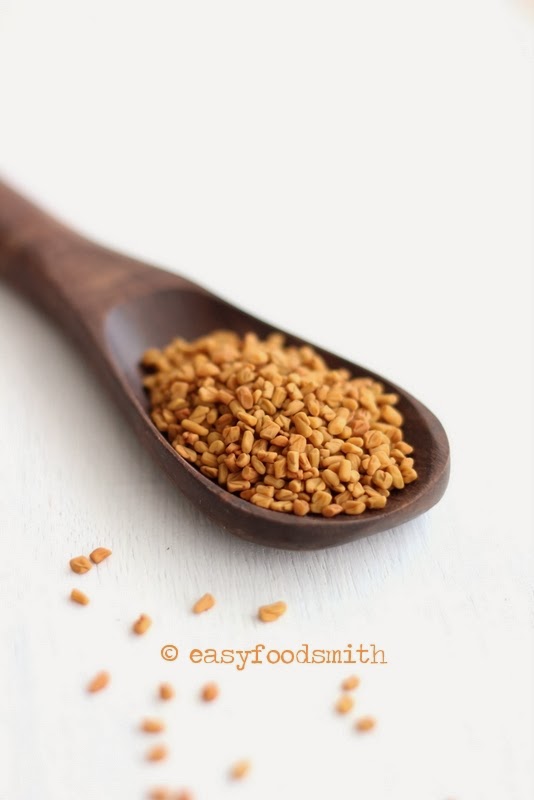 When allowed to seed, the fenugreek plant produces yellowish brown seeds that are bitter in taste. A tiny pinch goes a long way. They are an integral part, in fact form the bulk, of curry powders and are also used (powdered) in pickles. They are also one of the ingredients for panch phoran mix.
The fenugreek plant is leafy green winter vegetable that has a grassy smell and is bitter in taste. For many people it is an acquired taste just like rocket or chicory. Fresh methi leaves taste delicious when they are kneaded into dough and turned into for paranthas, fritters (pakoras) and Theplas. These taste scrumptious with a cup of chai or veg. curry. Try the taste of fresh methi in this delicious spread.

A generous pinch of dried crushed leaves called Kasoori Methi adds a delicious touch to an otherwise rich savoury dishes especially chicken and paneer (cottage cheese) curry. I used it to enhance the flavour of this Dhaba Chicken. 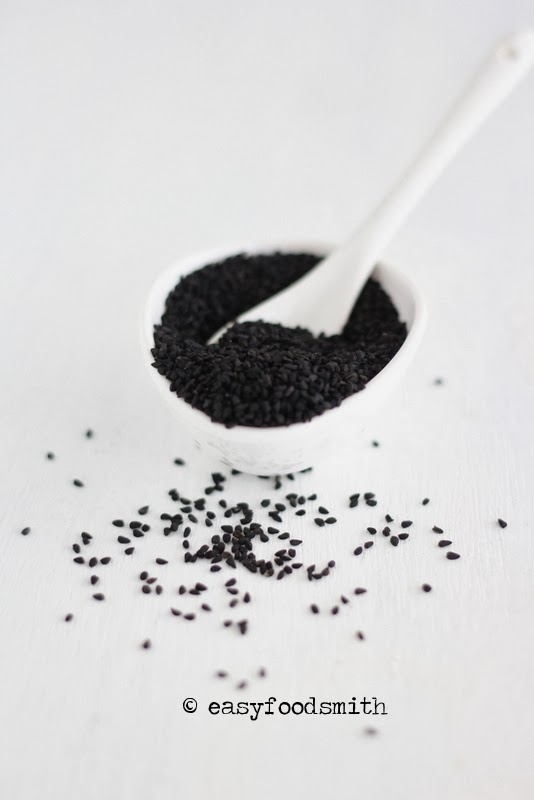 Also known as onion seeds, these black seeds are called kala jeera (black cumin) in Bengali cuisine and are the fourth ingredient of the panch phoran mix but don’t confuse it with the shah jeera which is also referred to as kala jeera. They are also known as onion seeds. These taste sharp and slightly bitter.
Just like the fenugreek and mustard seeds, nigella seeds are often added to north Indian pickles. The Bengalis and a few other states in the eastern region often use this to season curries. The seed is also used to spice up breads like naan and paranthas. They taste great sprinkled over salty crackers such as Nimki (or Namak Pare or Mathri).
SAUNF
Fennel Seeds 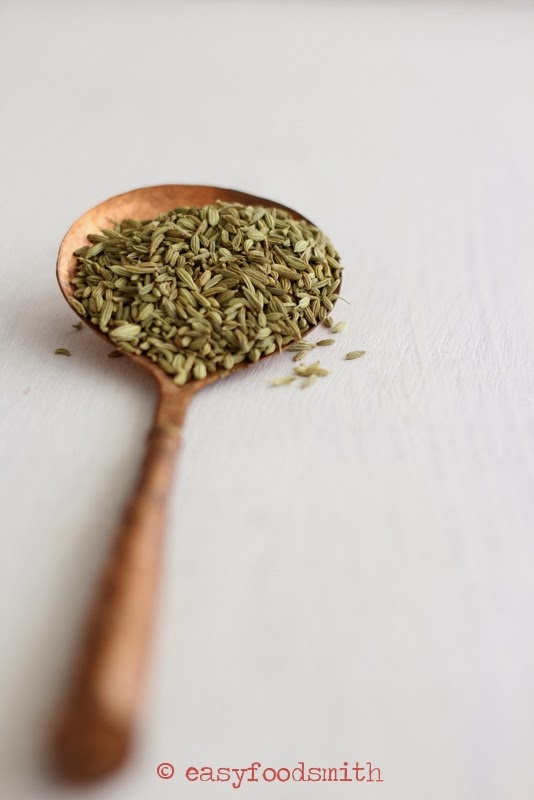 This slightly brownish green coloured oval seeds lend warm sweetness to the curries. It is the last of the five ingredients of the panch phoran mix. The seed is used for both savoury and sweet dishes. I used this spice in these Whole Wheat Pancakes.
The seed is a natural mouth freshener and is also believed to enhance digestion. It is often offered to diners after meal in Indian restaurants. Its primary notes in your mouth will be that of it being slightly bitter but it gradually releases its sweet flavor. As a kid I used to chew on it after meals and immediately sip on water. The water used to taste so sweet that I would keep sipping on it and ended bloating myself up!
SABUT LAL MIRCH & KUTI LAL MIRCH
Whole Red Chili & Red Chili Powder 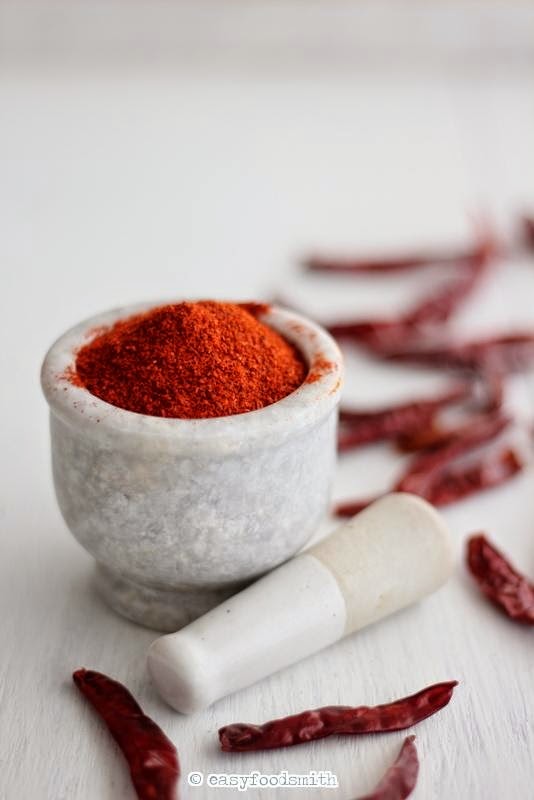 These are dried red chili and they add a smoky earthy heat to the dish as compared to fresh raw heat from the green chilies. The whole red chilies are usually added to hot oil and used for tempering vegetarian & non-vegetarian curries.
Whole red chilies are ground to obtain the red chili powder. There are variety of red chilli powders each lending a different intensity of heat to the dish. The ones ground with the seeds are the hottest. Kashmiri Red Chili Powder is mildest of them all and lends a beautiful colour to the dish.
HALDI
Turmeric 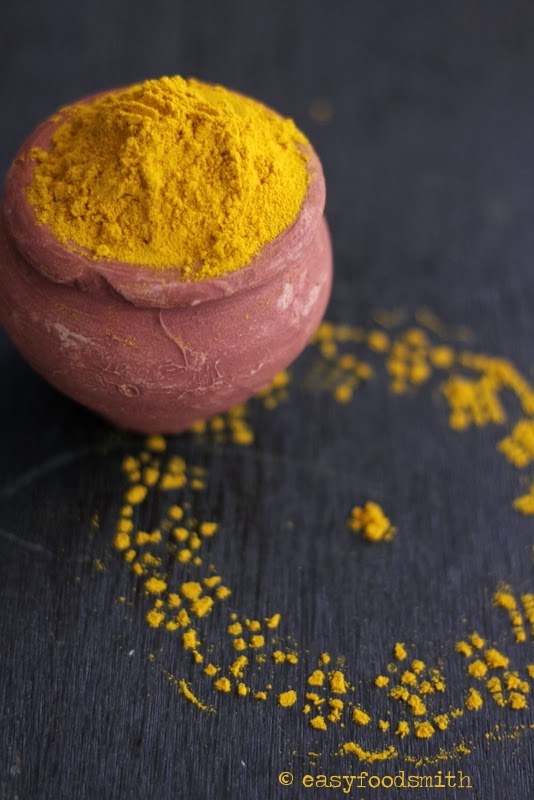 Turmeric comes from a plant related to ginger. It lends a yellow colour to many curries and dals. The raw turmeric rhizome is dried and ground to powder. It has a warm pungent taste and hence should be used judiciously. Too much of it can make the dish taste bitter. Turmeric is known for its antiseptic and digestive properties. It is supposed to be good for skin too. It is believed to help in healing broken bones and often mixed in a small amount to hot milk and given to the patient.
It has a reverential value in the Hindu culture and therefore happens to be an integral part of many auspicious customs and rituals. In a pre-marriage ceremony, the face and body of a Hindu bride and that of the groom is smeared with a paste made of turmeric and sandal wood to make their skin glow!!
SABUT DHANIYA
Coriander Seeds

Coriander seeds are the seeds of the herb coriander aka cilantro. While the herb is used for garnishing, the seeds, added whole or powdered, are mostly used in savouries. The seeds are usually added to the hot oil towards the beginning of a dish preparation while the powder is added to the masala (i.e. sauted onions, ginger, garlic with or sans tomatoes) along with other spices.
These goldenish seeds are earthy and slightly nutty with just a hint of citrus aroma. This spice is a favourite with the Punjabi community and I am no exception to that 😉
AJWAIN
Carrom Seeds 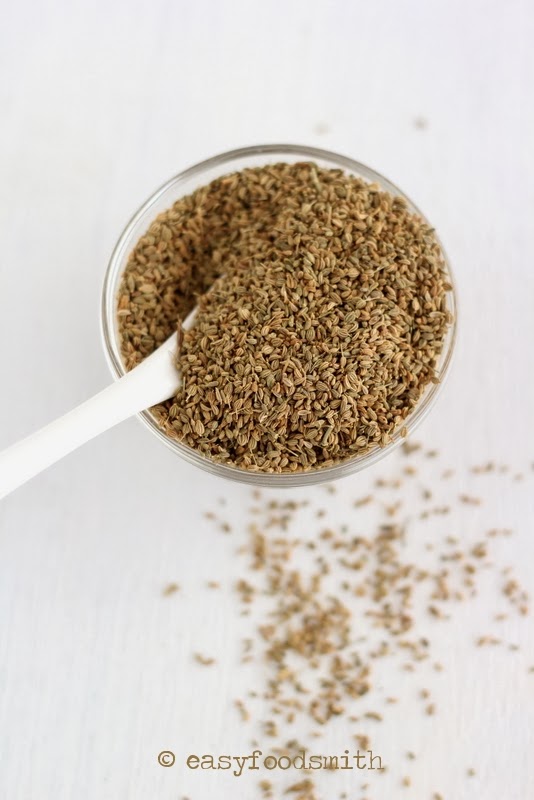 These tiny seeds have a bitter pungent flavor and are used mostly for tempering lentil dishes and added to batter for fritters. It has taste similar to thyme. Punjabis add a sprinkle of it along with some salt to make flat bread called parantha which is usually had for breakfast with a cup of chai or left over dal and pickle. Piping hot parantha, cold dal & pickle combine to make a taste that’s heavenly! Instead of using nigella seeds I sometimes use ajwain while making Nimki.
Ajwain is believed to help in indigestion and flatulence. When we were kids, mum used to make us gulp it down with some water when we had a tummy ache (¼ tsp of it with a pinch of salt)
Don’t miss the second part of the ‘Indian Spices’ series.