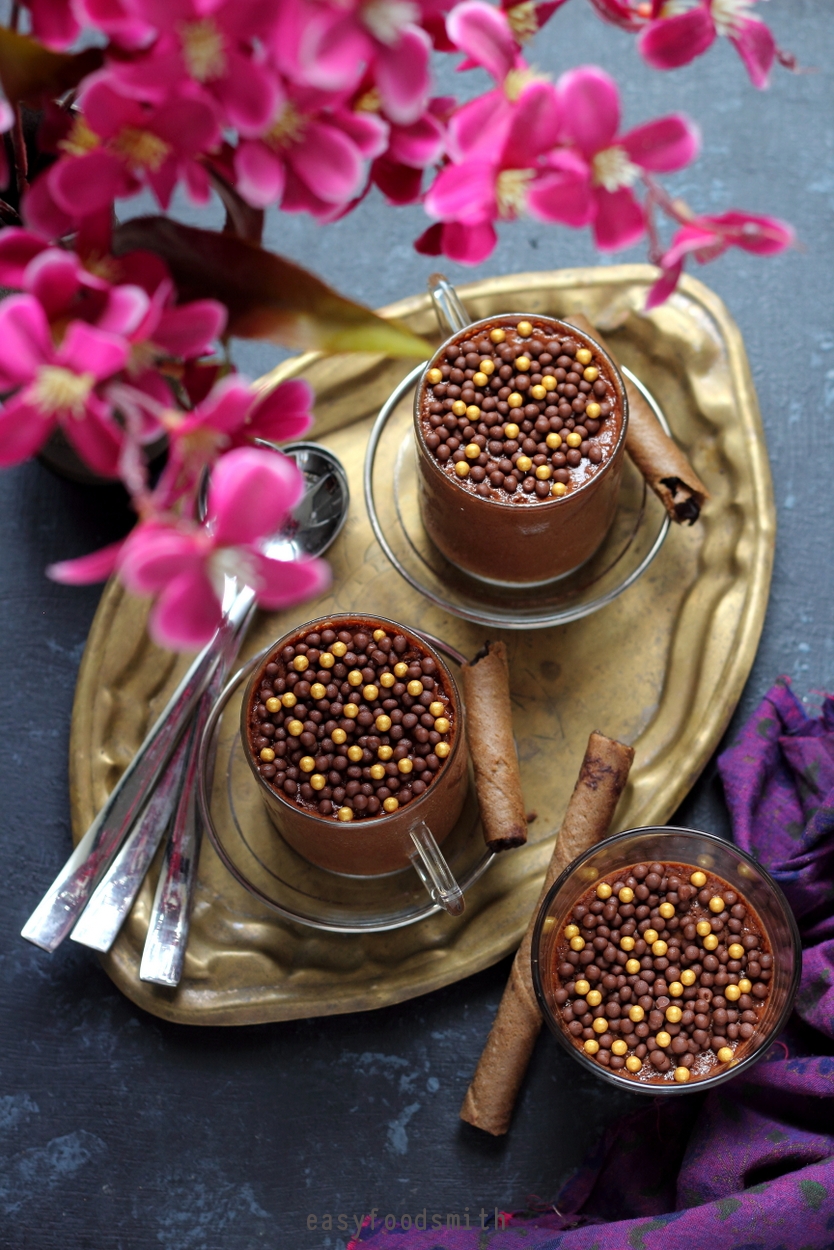 It was probably a year and a half ago that I first read about aquafaba. Didn’t pay much heed to it until this year when we decided to cut down on calories since my teen is leaning towards being over weight. So to allow her to enjoy her dessert in a healthy, guiltfree way, aquafaba seemed to be the answer. By the way, aquafaba is no fancy ingredient. It is the viscous liquid procured from cooked chickpeas that have been soaked and boiled (you can use the aquafaba from store brought can of chickpeas). Did you know aquafaba has apparently been on the food scene since 2014? After some procrastination and also after a few failures I finallly managed to make a mousse that is nearly perfect. Why nearly perfect you ask? Well, because there is always scope for improvement 😊 I learnt a few things by trial and error and a couple of others by reading online about aquafaba and what makes it tick. So the things you need to keep in mind is, one, if you are making aquafaba at home, see to it, that it is not watery in consistency. It should be somewhat viscous Second, you need to ensure that you chill the aquafab before you start whipping it, similar to whipping cream. Third, it will take time to form peaks; anwhere around 15 – 20 minutes. Fourth, when you mix the melted chocolate, ensure that the chocolate is cool. What I learnt from online sources was that adding a teaspoon of lemon juice helps stabilize the aquafaba leading the peaks to stay longer. (However, I used cream of tartar instead) And the most important element required for making this dessert, in my view, is patience; first, when you whip the aquafaba to form peaks and later when you fold the chocolate into the whipped aquafaba. While you are folding the chocolate, the whipped aquafaba might seem to collapse/ deflate and that the contents are pourable but once you chill the contents they will have a lovely consistency, that of a light airy mousse.

3 – 4 tbsp Agave Syrup or any sweetener of your choice 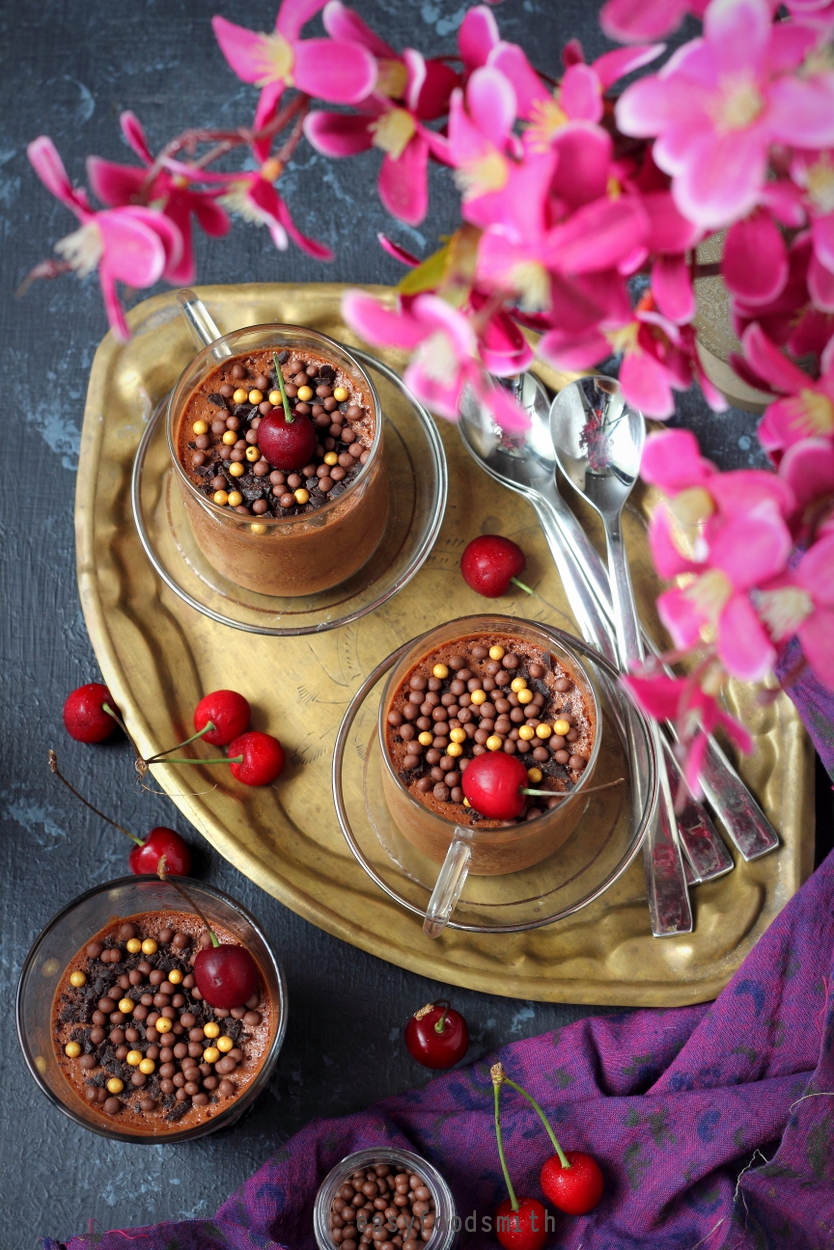 Transer the aquafaba in a bowl and add the cream of tartar (or a little lemon juice) along with the sweetner (If using icing sugar, you need to add it later, tablespoon by tablespoon, once the peaks begin to form)

Begin to whisk it at a slow speed for a minute (using hand whisk or stand mixer is recommended) and gradually increase the speed to high. (If using hand whisk, you might need to take two three breaks in between the whisking)

Whisk for 15 – 20 minutes or till the aquafaba forms peaks.

Melt chocolate over bain marie. (I add the chocolate to the bowl once the water begins to boil and the bowl is warm. Then I reduce the heat to low and and allow the chocolate to melt (without stirring). It takes approximately 5 – 7 minutes for this much amount of chocolate. Once the chocolate has nearly melted I switch off the heat and stir it gently so that I get a uniform melted chocolate.)

Remove the bowl from heat and allow the chocolate to cool down. 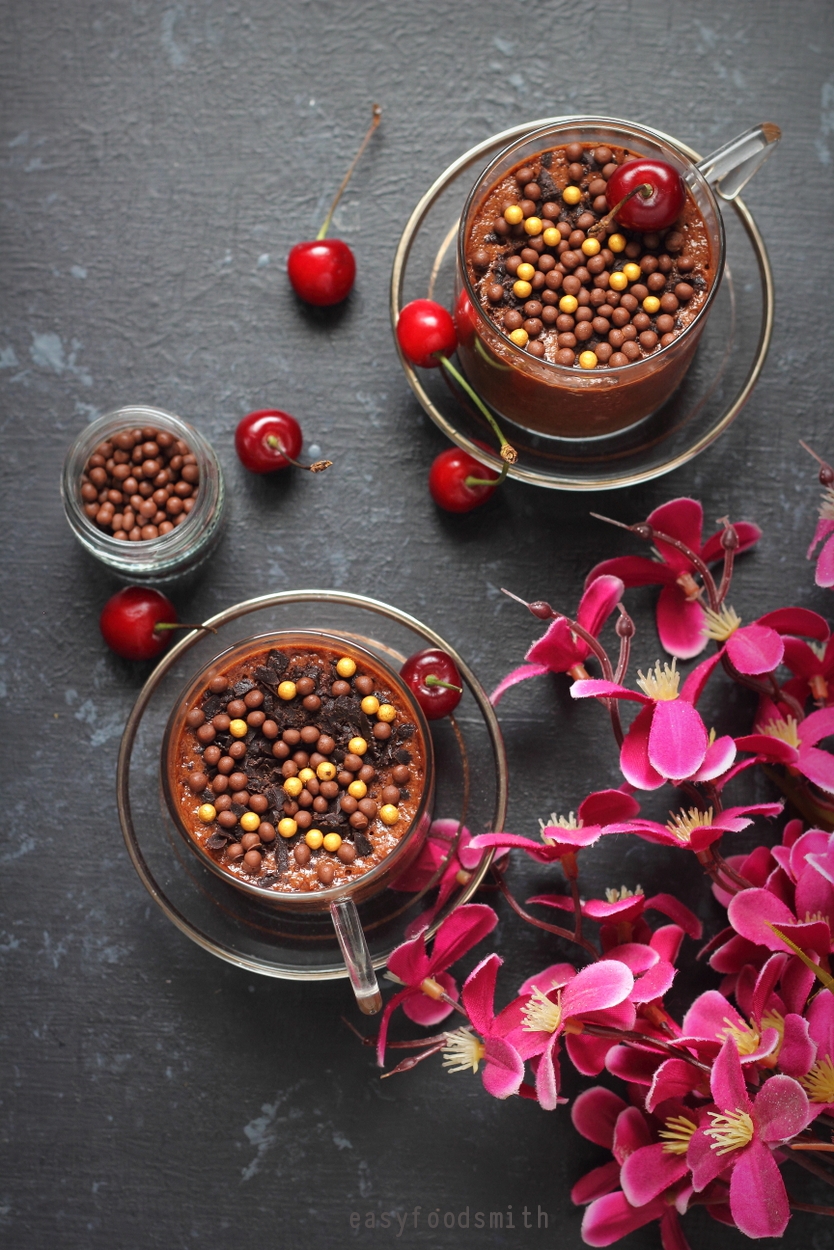 Add the chocolate to rest of whipped aquafaba and gently fold it in, till there everything is well incorporated and there are no white streaks.

Pour the chocolate aquafaba mix into the serving glasses or cups and keep in the fridge for at least four hours or over night. (I believe 100 ml glasses would be ideal to serve this)

Serve garnished with some chocolate curls or dusted with cocoa powder.

Note – Using cream of tartar is purely optional but experience has taught me it is a good idea to use it as the whipped aquafaba holds its peaks way better this way.

Note – I used narrow bottomed bowl to ease the process of whisking the liquid aquafaba. The broader the base, the more spread your aquafaba will be and the harder it will be to whisk it.

Note – Depending on how much is the cocoa content in your chocolate, adjust the amount of sweetener. I had used agave nectar but you can use icing sugar or any other sweetener of your choice.

Note – I guess you can take up the amount of chocolate to 150 grams if you wish to.

Note – You can use the chickpeas for making hummus, curry, salad, fritters, pancakes or anything that your heart fancies! 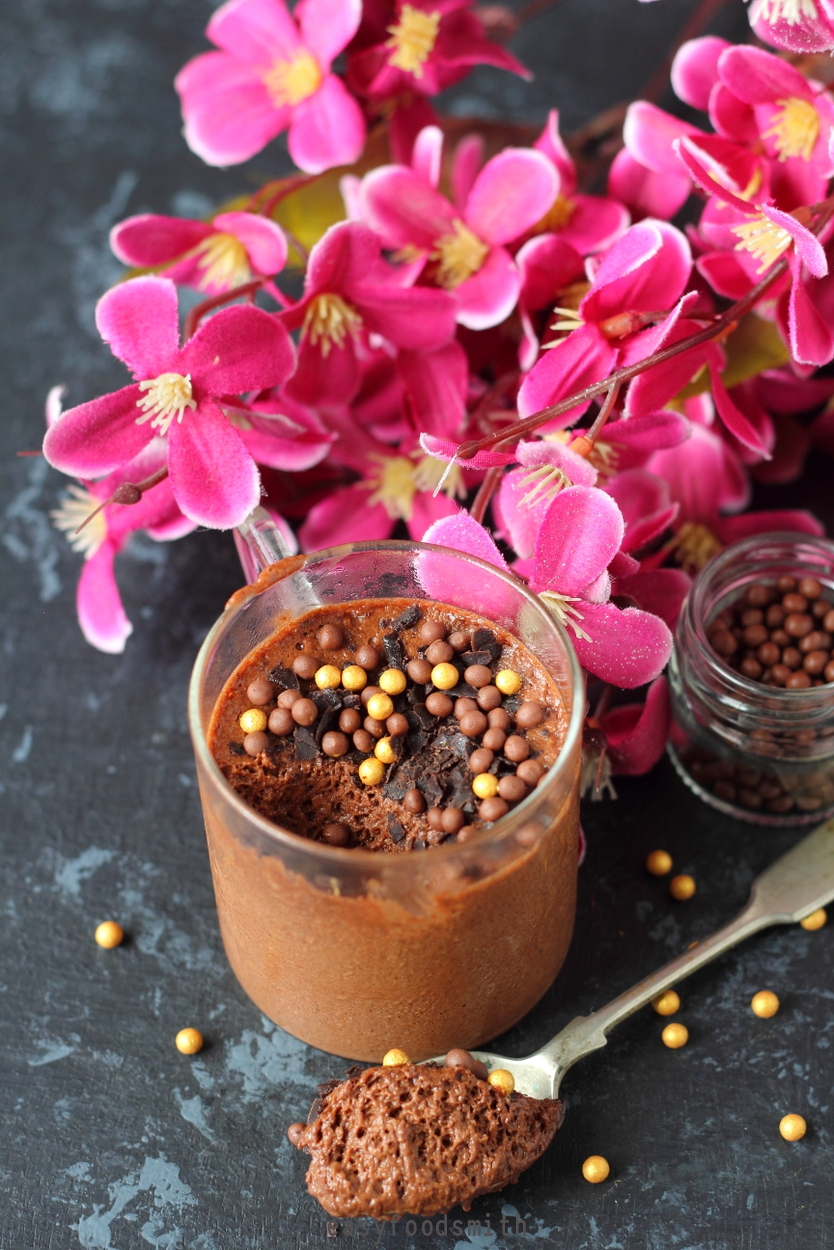