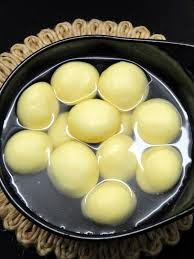 Soft and spongy, drenched in sugar syrup; Khirmohan for an Oriya, Rôshogolla for a Bengali, Rasgulla for a Punjabi (and other north Indians) – this mouth watering Indian dessert can be eaten by dozens!! Yes, I said dozens because you can have this dish guilt free since it is low on calories (more so if you squeeze out the sugar syrup).
Made from cottage cheese cooked in syrup of sugar, traditionally Rasgullas were served at room temperature but these days they are served chilled. In northern India, the dish comes flavoured in saffron, rosewater, and sometimes garnished with chopped pistachios.
What better way to celebrate Durga Puja! Though it is the state of Bengal and the Bengalis who are commonly associated and credited with this sweet, the fact is that the origin of this dish lies in the city of Salepur in the state of Orissa. Surprised! Aren’t you? It was during the British rein that this dish found its way to the state of Bengal.
Though simple as it sounds – cheese balls cooked in sugar syrup – it took me a few trials and errors before I could  understand the nuances of technique and dish out soft and spongy rasgullas. The first attempt was such a disaster that the balls were hard enough to play cricket with!! J 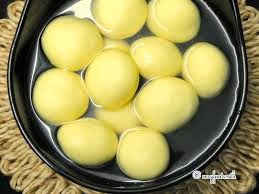 There are certain key factors that need to be kept in mind so as to dish out soft and spongy rasgullas:

Keeping the consistency of cheese perfect is actually the key in creating this dish– I speak this for myself. You will need the following – 1 litre full cream Cow Milk 2 tbsp Lemon Juice mixed in two table spoons of water 1.5 to 2 litres of Water 400 grams Sugar 1 tbsp Milk or Lemon Juice A pinch Saffron (optional) 1/2 tsp ground Cardamom (optional) 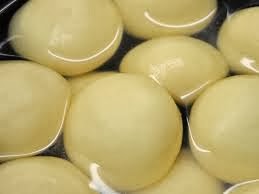 Boil the milk by continuously stirring it to prevent formation of malai (creamy layer) on top.  Once the milk comes to a boil, switch off the heat. Keep stirring it for two to three minutes and then gradually add the lemon juice mixed in water. Keep stirring for approximately 30 seconds and wait for the curds to separate. If they don’t, add a little more of the lemon juice mix and again stir.    Once the milk gets curdled add some chilled water to bring down the temperature of the whey and cheese.
Strain the cheese by pouring it on to a cheese cloth or muslin cloth lined over a sieve and kept over a pot to catch the whey.   Try and remove excess water but do not over do the process as the cheese will dry out.
Tie the the ends of the muslin cloth and hang it for 20 – 30 minutes. Squeeze to extract any water that still may be there.
In a large wide pot (to ensure that the cheese balls have enough space to cook in the water) boil the water with sugar. Add a tablespoon of lemon juice or milk to get rid of any scum/ impurities. The scum will rise to the surface which can be removed with a spoon. Add aromatics at this point if you wish to.
While the water is coming to a boil, remove the cheese on to a plate, mash it with the base of your palm. Mash it well so that there are no large grains left. The process can take anywhere between three/ four minutes to 12 – 15 minutes (The amount of time that you need to mash the cheese will also depend on the quality of milk from which cheese has been procured. Also, the cheese will start releasing the fat and you need not go any further.) If you wish, you may add a teaspoon of corn flour or arrowroot or maida to the cheese at this stage and mix it in.   Start making small balls (since they will triple in their size when boiled) with the cottage cheese by gently pressing the cheese between your palms. 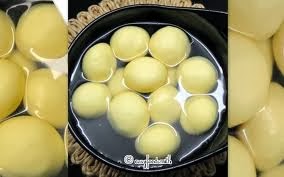 Gently add these balls to the boiling water. Ensure that water is on a rolling boil. Cover the pan with a lid and let the balls of cheese cook on high for the first two minutes and during those two minutes, every 30 seconds splash the rasgullas with a tablespoon of hot water. (a trick shared by my mother-in-law to make softer spongier rasgullas)
After two minutes of cooking on high flame, cook the rasgulla covered for approximately 12 – 13 minutes more.
(The rasgullas needs to be cooked a total of fifteen minutes so adjust the time)
Once done, remove the container of rasgullas from fire, allow to cool and then transfer them to the serving bowl. Serve warm, at room temperature or chilled. (They taste best when chilled)
Makes 8-10 Rasgullas (depending on the quality of milk used and the size of rasgullas you made, the amount will fall anywhere between 8 – 12)
Thanks for visiting and see you soon again!