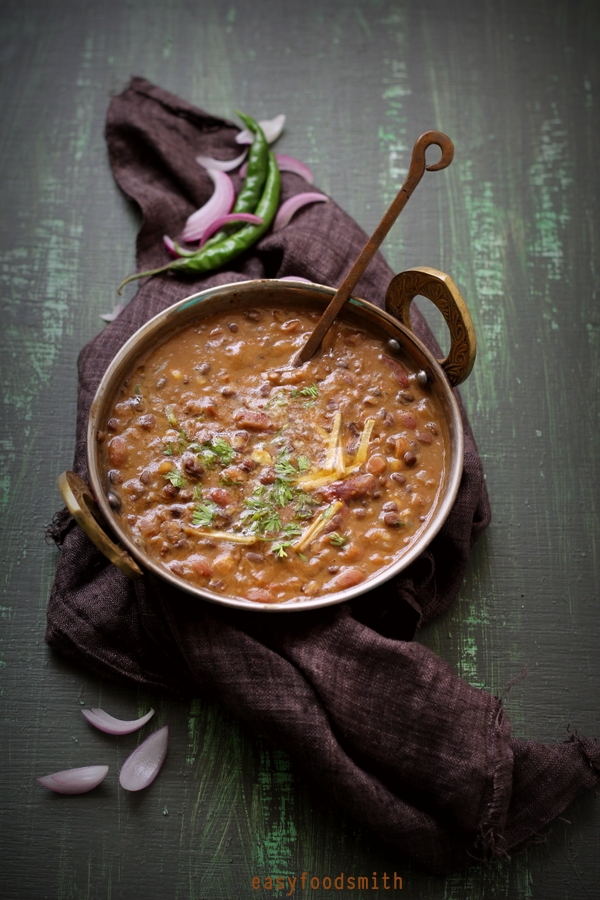 This dal has been on my list of recipes, to post during winters, since the past four years of blogging! However I will squarely put the blame on my exuberant attempts to make the most of winter produce, which always put this dal on the back seat. However this time around I made it a point that other posts now need to wait while I put the queen of lentils back on its high pedestal to where it rightly belongs. A rich and creamy lentil stew that is best enjoyed during the cold winter season. It is also called kaali dal (black lentils) and holds a very exalted status amongst the Punjabi community. This dal and Chhole is an omnipresent feature on the menu of any Punjabi wedding. I remember those special Sunday lunches when my dad used to prep the coal fired angeethi early in the morning and cook these lentils over the slow coal fire. He would leave the dal to stew for hours, adding water time and again as it grew thicker in consistency. Then he would add the tempering and cook it further on. Long, leisurely, slow cooking made the dal gain a creamy consistency even when no butter had yet been added to it. The angeethi lent it a distinctive smoky taste that gave this otherwise royal stew a lovely little rustic touch making it even more special. Dollop of freshly churned homemade Cultured Butter was added along with some malai (cream) and the piping hot dal was then served with Tandoor Roti and Garlic Naans, Sour Mango Pickle and pickled onions. Heaven on a plate!

The secret to making a nice and creamy dal makhani is not entirely loads of cream and butter as many people may like to think. It is actually slow and extended cooking hours that give it that texture and taste. The Dal Makhani at the legendary Bukhara restaurant in Delhi’s ITC Maurya is cooked and simmered over coal fires for nearly 18 hours! So now you know what makes it the best Dal Makhani in the world. It is an intense labour of love and patience put together…similar to my dad’s dal makhani. Therefore this lentil stew is best left to be made on a weekend or perhaps left to cook in a slow cooker overnight. The best thing about this dal is that it tastes even better the next day. I usually prepare this dal a day before it needs to be served. I refrigerate it and then before serving, I add butter and reheat it. We Punjabis add chana dal (split Bengal gram lentils) and Rajma (to the dal but you can cook the lentils on their own. However, I always prefer the traditional way; the taste I have grown up loving.

Any recipe that mentions Dhuli dal, refers to the dal or lentils without the skin. Sabut or Saboot Dal in a recipe refers to the dal with the skin. Here we have used Sabut Urad Dal or Ivory Lentils with their skin on; skin is black in color and hence we Indians refer it to as the Kaali Dal (Kaali is the feminine for the word black). Dals with their skin on are considered better than the skinless dals. You can check this Ivory Lentil Salad post to see what are ivory lentils. They are also called urad dal and are also used to make Dahi Vadas or Dahi Bhallas and also used for making Sookhi Urad Dal. 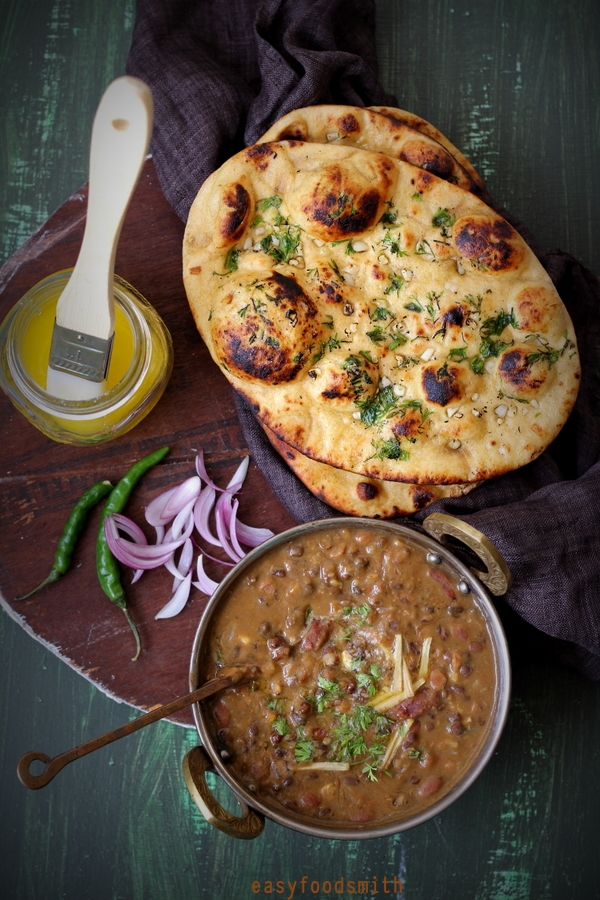 2 medium sized Tomatoes (use more if you wish to), finely chopped or grated 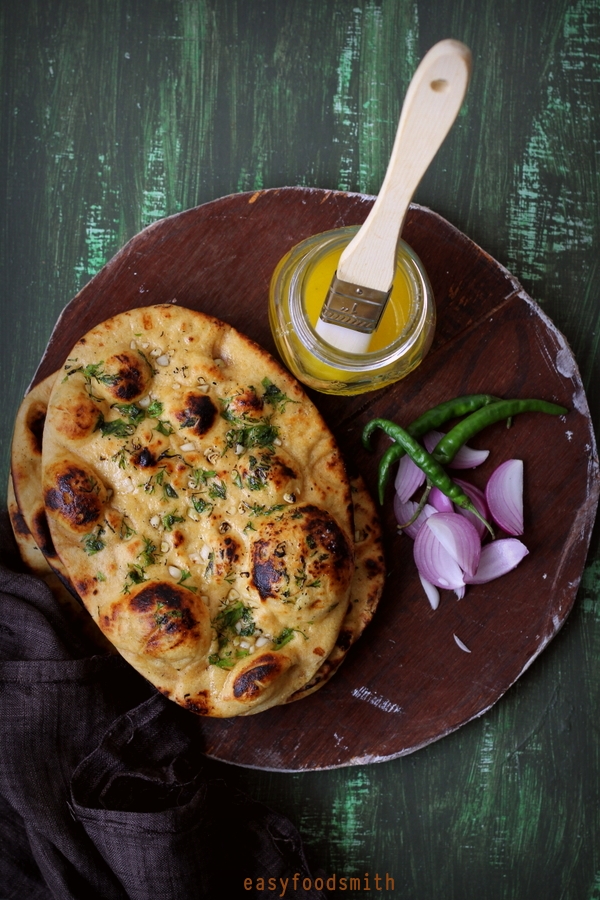 2 tbsp cream (or half a cup of full fat milk)

Cook the lentils and kidney beans on the lowest possible heat for about 20 – 25 minutes. (If you are cooking the lentils in a pot, ensure to cover the pot. It will take more time for the lentils to cook compared to the pressure cooker method) Switch off the heat.

For tempering, take oil in a pan and once it is hot (not smoking), add the asafoetida and cumin seeds. Add the chopped onions and garlic & ginger. Sauté till they turn golden in colour. Add tomatoes and cook on medium low heat till they become soft and well assimilated into the masala. Add coriander powder and cumin powder along with garam masala. Cook for a few seconds more and then add to the lentil stew. Stir it well and cook the lentils further for 2 – 3 hours on low heat. (if using milk instead of cream, add it at along with the tempering and boil the dal) 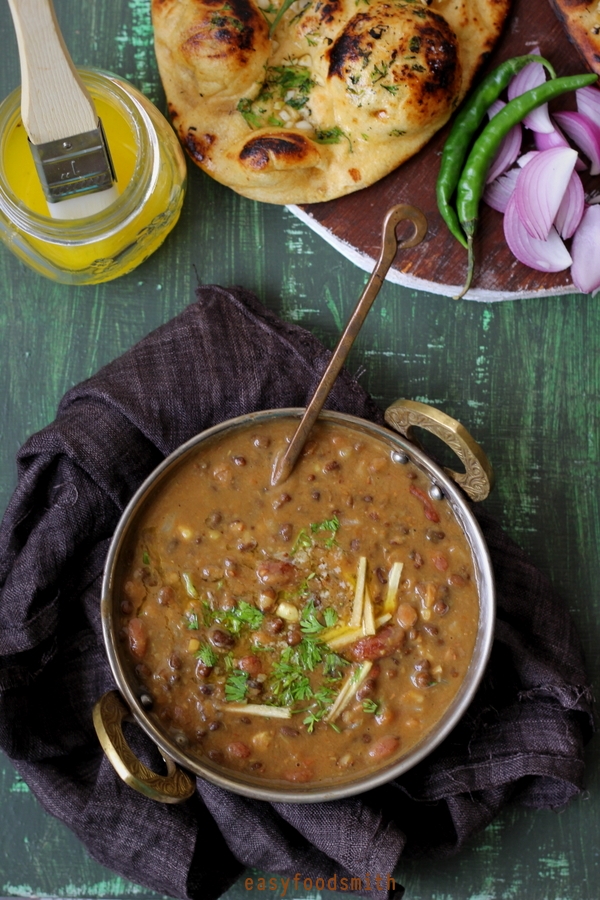 Post the adding of tempering, you will have to keep adding water (perhaps half a glass to ¼th glass at a time) till the lentils are almost creamy in consistency. Since the lentils grow thick in consistency as they cool, adjust the amount of water and add cream & 1 tbsp butter. Cook further for 10 minutes or so.

Transfer the stew to the serving pot and add 1 tbsp butter. Give it just a gentle stir so that the melted butter is visible and spreads all over the top. Garnish with ginger julienne and cilantro. (Some people also drizzle some cream over the stew before serving. Suit yourself.) Serve with Garlic Naan. (Use this Naan recipe & see details for Garlic Naan below)

Note: I would categorise this lentil preparation as a stew rather than a lentil soup since it takes nice slow time to achieve the desired consistency. And it is pretty rich for being a soup.

Note: You will need to keep adding water time and again as the dal cooks till the dal and water are well assimilated to the point of being almost creamy.

Note: Long patient hours are required to cook this dal therefore I suggest you take a heavy pot, perhaps a cast iron one so you do not need to keep a constant eye on it. Or even better, use a pressure cooker, cooking the dal on the lowest possible heat. But nothing beats the slow cooking process.

For the Naan: I made these Garlic Naans on a skillet rather than an oven. You will need a few table spoons of finely chopped garlic that you need to sprinkle over each rolled out Naan and then press into the naan by very gently rolling it with the rolling pin. Transfer the rolled dough on a medium hot skillet (keeping the garlic side up and slightly moistening the other side) and reduce the heat to medium low. Cover the naan with a lid and after a 10 – 15 seconds you will notice puffed up top. Carefully remove the naan from the skillet and cook the garlic side directly on the stove top. This will blister the naan and give a nice charred look and taste. Smear ghee or butter and serve hot with the stew. 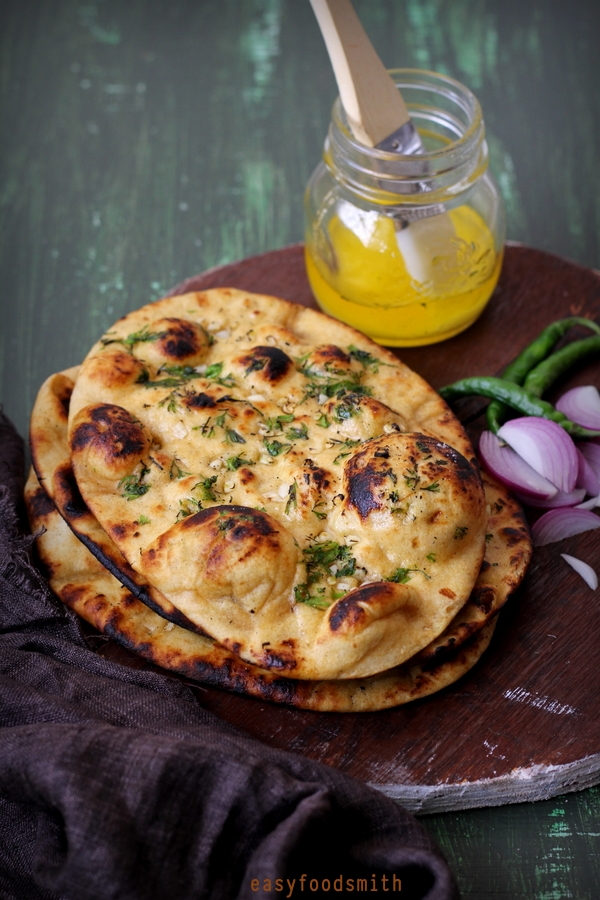