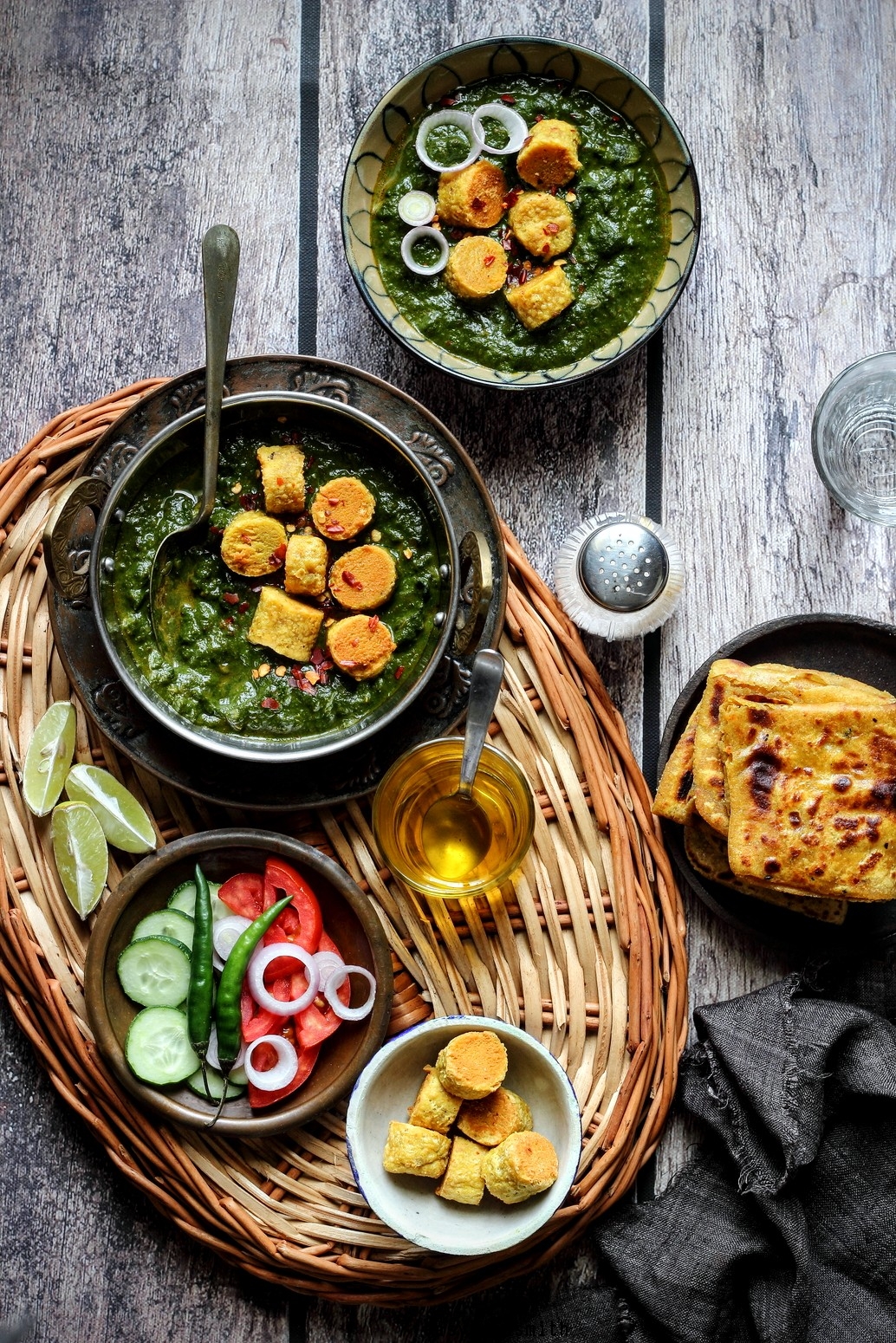 There are certain dishes that I learnt about from my mother-in-law and gatte ki sabzi is one of them. She taught me one version, that I have already shared on the blog. And this is the other version. It is a popular and much-loved dish from the western region of India, Rajasthan to be precise where it is cooked in a yogurt based spicy and hot curry.

Gatte are made from chick pea flour. The flour is first turned into a soft dough which is then rolled into cigar shapes and then boiled in water. Post boiling they are sliced and flash fried and then added to a yogurt based curry. The masala curry is made separately in which they are served along with roti or rice. The gluten free and vegan curry is meant to be (at the Rajasthani version) spicy and hot. I have swapped the rich masala curry with healthier version i.e. by using palak / spinach puree; also, because it is in season and much loved in my house. It is a delicious and healthy curry to have, one that is perfect for the season, not because of the spinach alone, but also because besan or chickpea flour is good to be consumed during winters as it provides ‘warmth’ the body (so says the Ayurvedic wisdom)

To finish off the dish, I used the same method of smoking the curry that I used for making the Dhungar Murg (Smoked Chicken Curry) and it added a delicious dhaba style touch to this gatte ki sabzi 🙂  The only thing different I did was, to smoke using a smaller piece of charcoal and smoking it for a minute and a half and it did wonders to an already delicious curry. Finger licking good stuff! 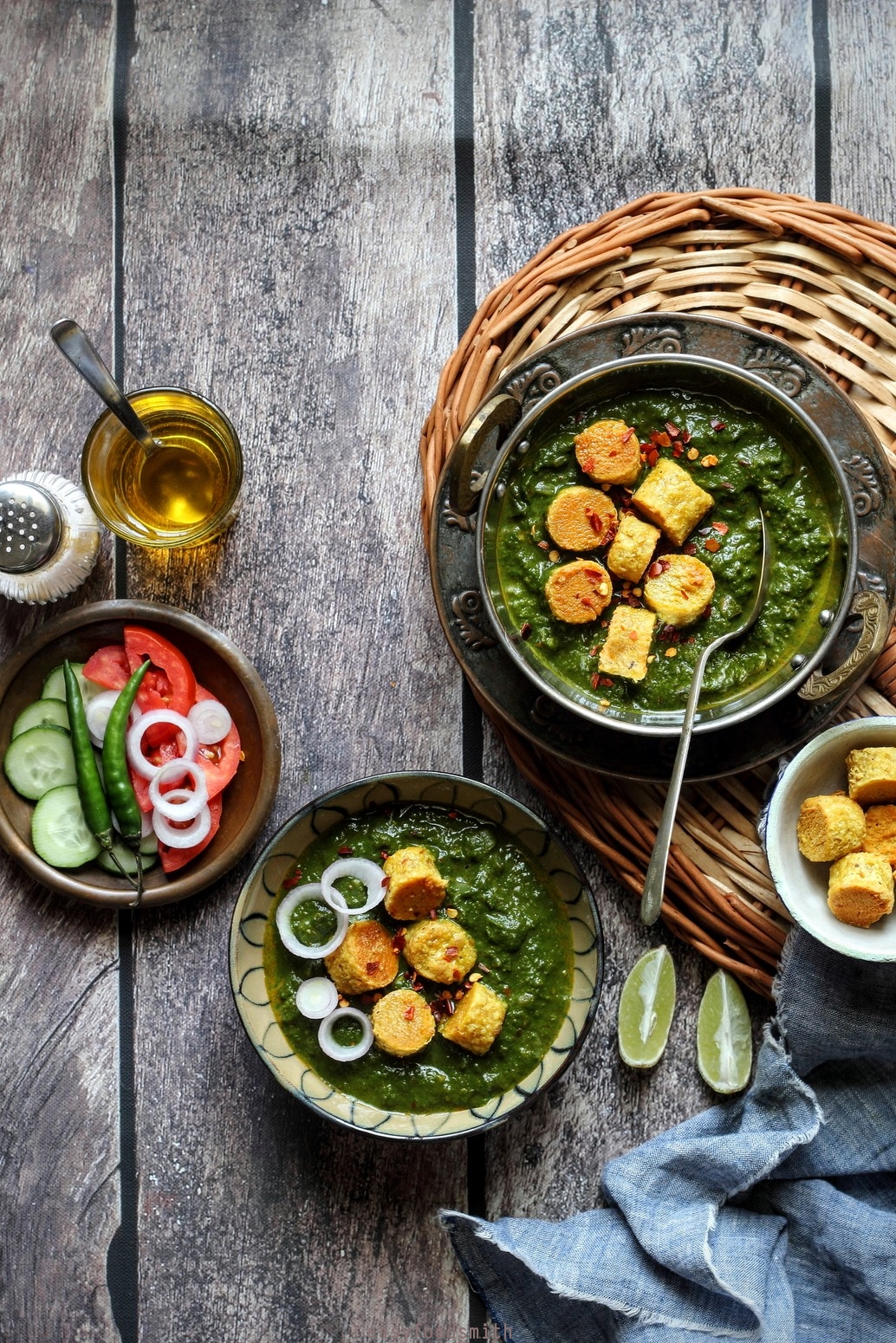 1 tbsp Ghee (vegans can use oil) 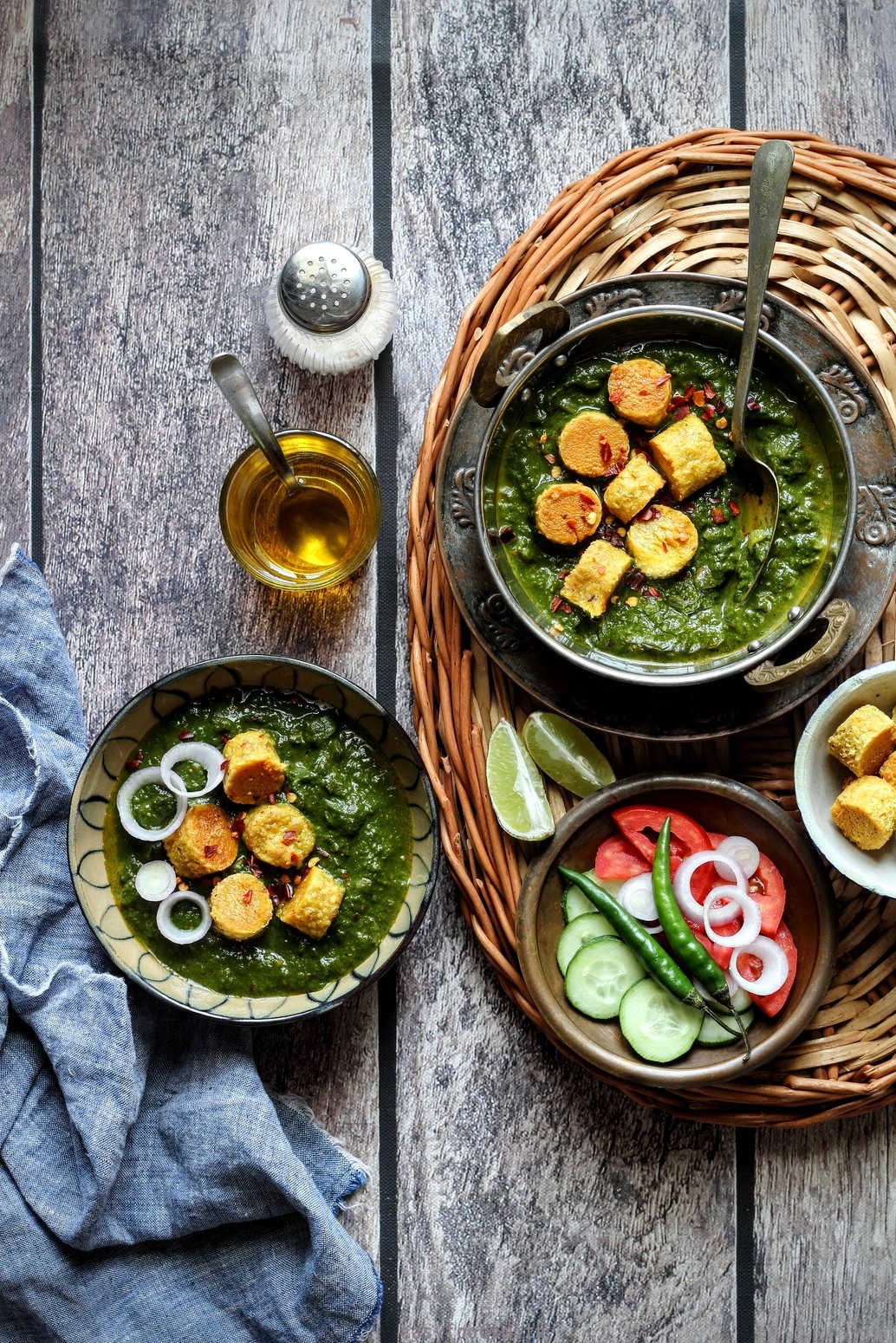 Gently crush the ajwain and jeera seeds using a mortar and pestle or between the palms of your hands.

In a mixing bowl add the besan, jeera, ajwan, salt, red chili powder, turmeric and salt. Add ghee, yogurt and ginger garlic paste and bring the everything together using your fingers.

Add water to make a soft dough. (I used only a teaspoon of water. The amount of water will depend on the quality of besan) Keep it aside, covered, for ten minutes.

Bring a litre of water to boil on high heat in a cooking pot.

Meanwhile, add the oil to the dough and stretch the dough with the base of your palm for at least half a minute. Divide the dough in two equal halves and roll each dough halve into half an inch-thick smoothly rolled log. Cut the two individual logs into two equal halves.

Add the four dough logs into the boiling water, one by one, to ensure that the water is always on a rolling boil.

The temperature of the water should not drop. It should be boiling at all time while you add the rolled logs. Once you have added all the logs, reduce the heat to medium and keep cooking the logs, ensuring that the water is still boiling. (Do not cover the pot)

Cook till you see the logs getting tiny blisters on their skin. It will take anywhere between 8 – 10 minutes.

Gently remove the logs from the water and place them on a plate. When they are cool enough to handle, cut them in half an inch pieces (or as small or big as you desire but smaller works best). Set aside

Flash fry them in hot oil just to bring a golden color on the skin and although it is an optional step, it is much recommended by my mother-in-law. 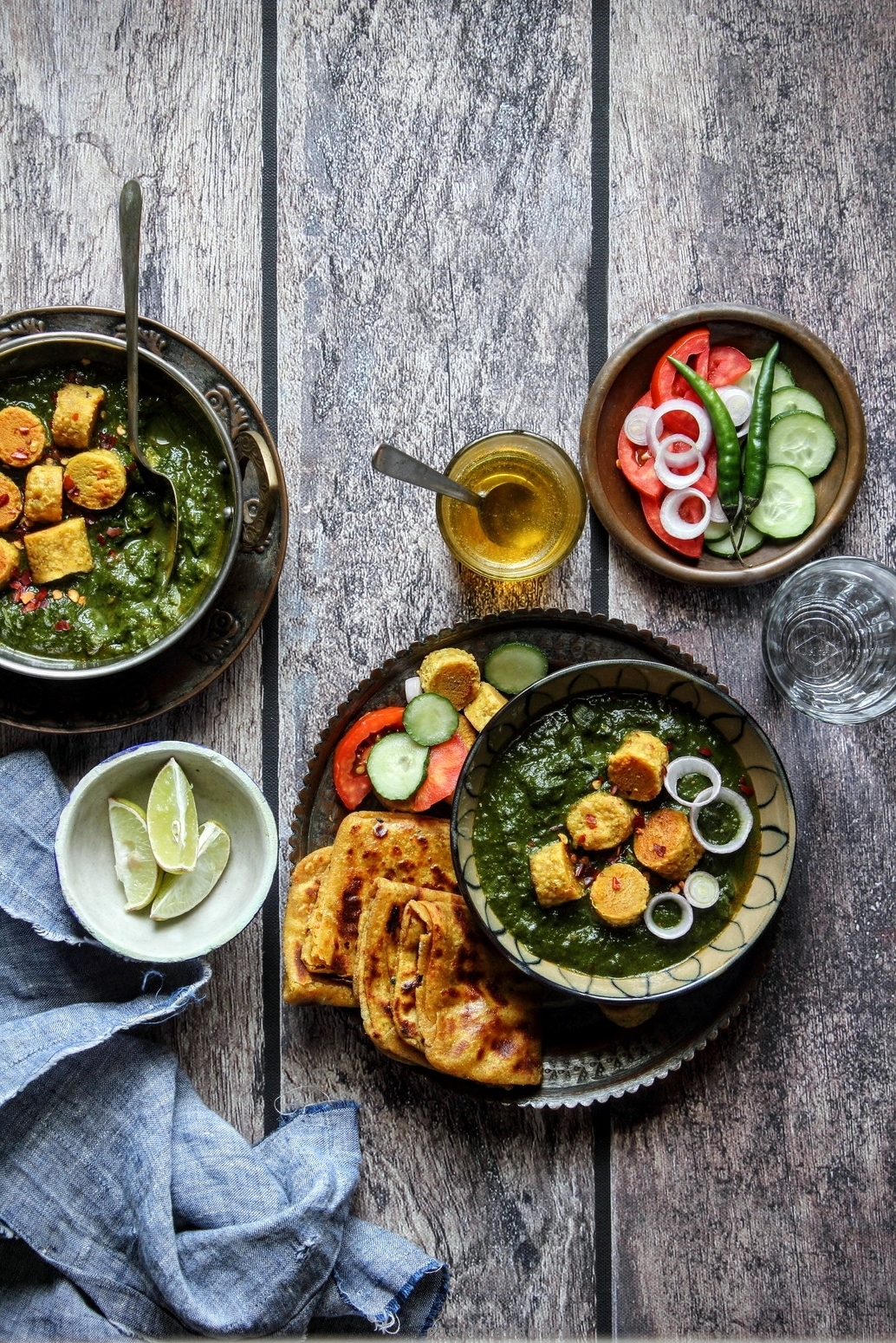 Pick the spinach and remove hard stems if any. (I use tender stems along with the leaves and the cleaned spinach weighed approximately 275 grams)

Clean the spinach and wash spinach in plenty of water, three to four times or till there is no grit visible in water. Place the spinach in a colander for excess water to drain.

To blanch the spinach, heat a litre of water in a pot and bring it to boil. Add washed spinach to the boiling water and cook for three minutes on high heat. Switch off the heat and drain the water by passing it through a large sieve to catch the spinach.

Immediately plunge the spinach in ice water. Once it cools drain excess water and leave the spinach in the sieve or a colander till most water has drained. Remove the rest by gently squeezing the spinach between your palms. Puree the spinach using half the quantity of milk and set aside. (you can adjust the consistency of the spinach later by adding water or more milk, as required)

For tempering, heat oil in a pan and add jeera. Once it begins to crackle, add heeng, followed by onions, garlic and ginger. Cook till the onions turn golden brown and the garlic and ginger become aromatic.

Add spices and fry for ten seconds and then add pureed tomatoes. Cook till the masala releases oil around the edges and tomatoes are cooked. Add the pureed spinach and cook for half a minute. Adjust consistency by adding the rest of the milk or water. Bring to a boil.

Add gatte to the curry and cook on low heat for five to seven minutes. Drizzle with desi ghee and serve hot with chapati or Naan or Dal ka Paratha (recipe given below)

Note – In all the pictures, shared here, I have scattered the gatte on the top of the spinach curry just for the sake of optics. They are meant to be cooked with the spinach before being served. 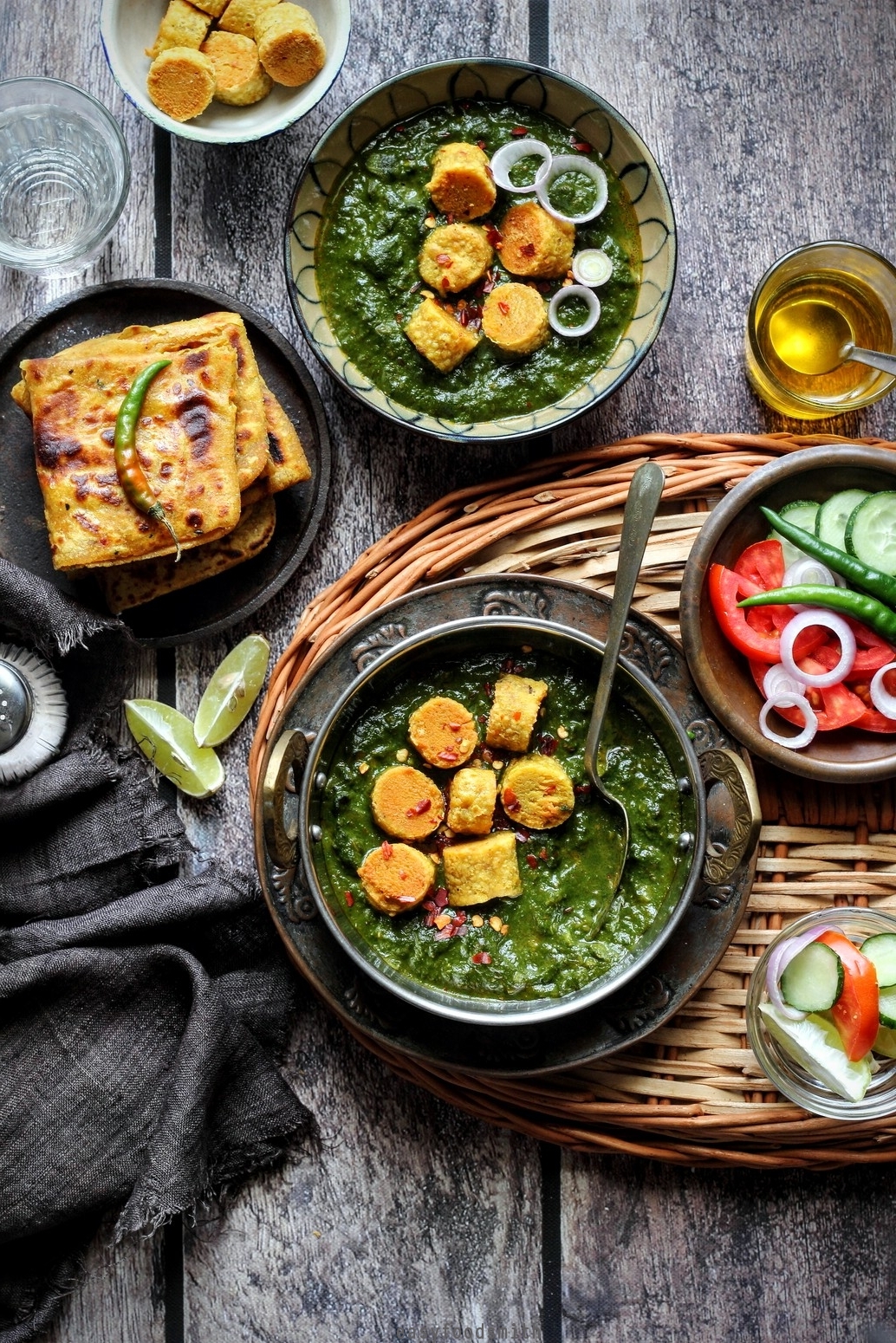 Oil for frying the paratha / flatbread 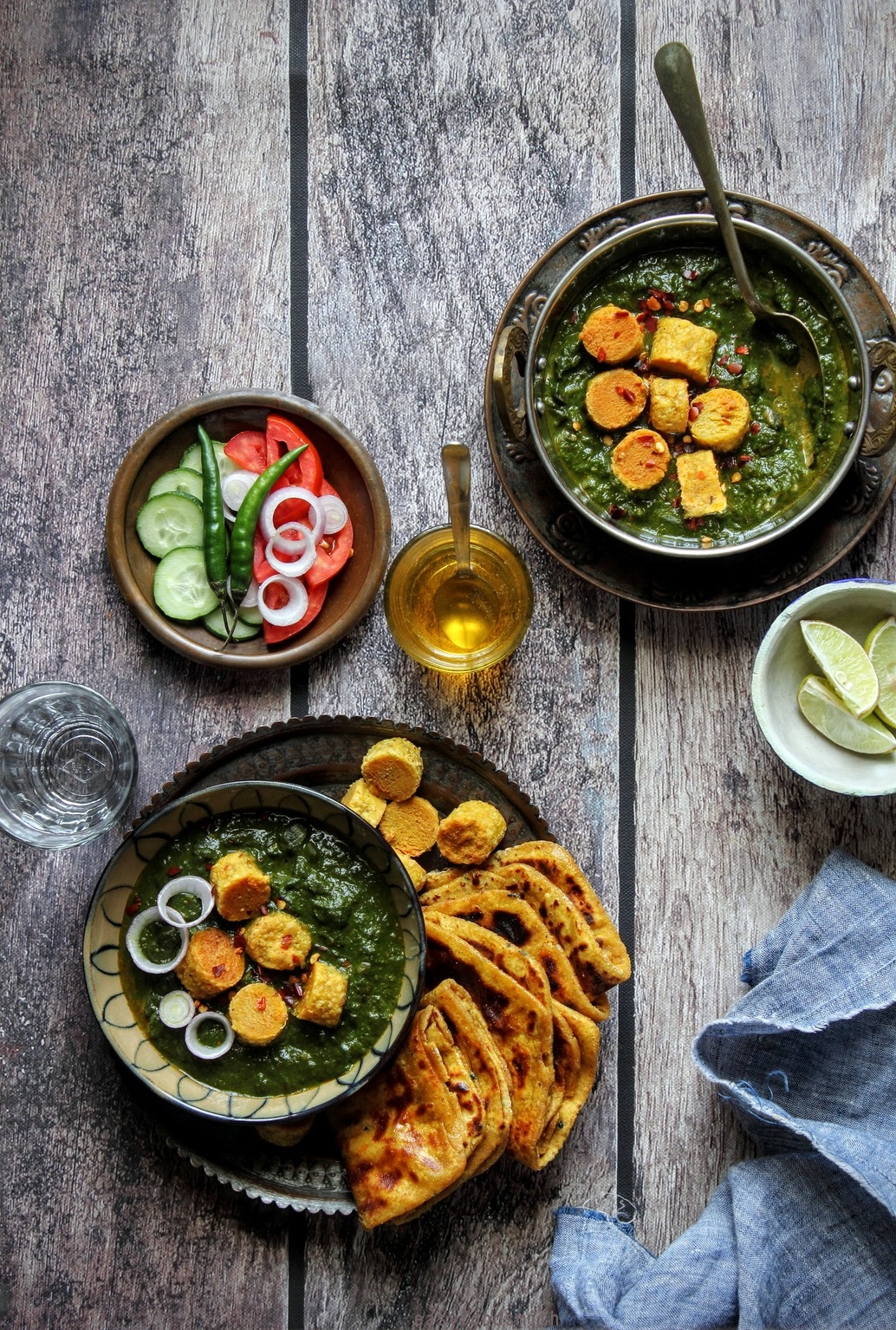 In a mixing bowl add all ingredients (except oil) and bring them together to form a dough. Add water as required to make a soft pliable dough. Knead for five minutes and cover and rest the dough for at fifteen minutes.

Divide dough in eight equal sized portions and make the paratha as shown in the picture below . Roll the dough to five to six inches sized square flatbread and cook on a skillet.

To cook, place each rolled flatbread on a medium hot skillet and once the top begins to change color, flip and cook the other side. Flip again and apply some oil and fry till the flatbread turns golden brown in color (as shown in the last picture).

Enjoy it hot with ghee or butter on its own or with any curry of your choice. 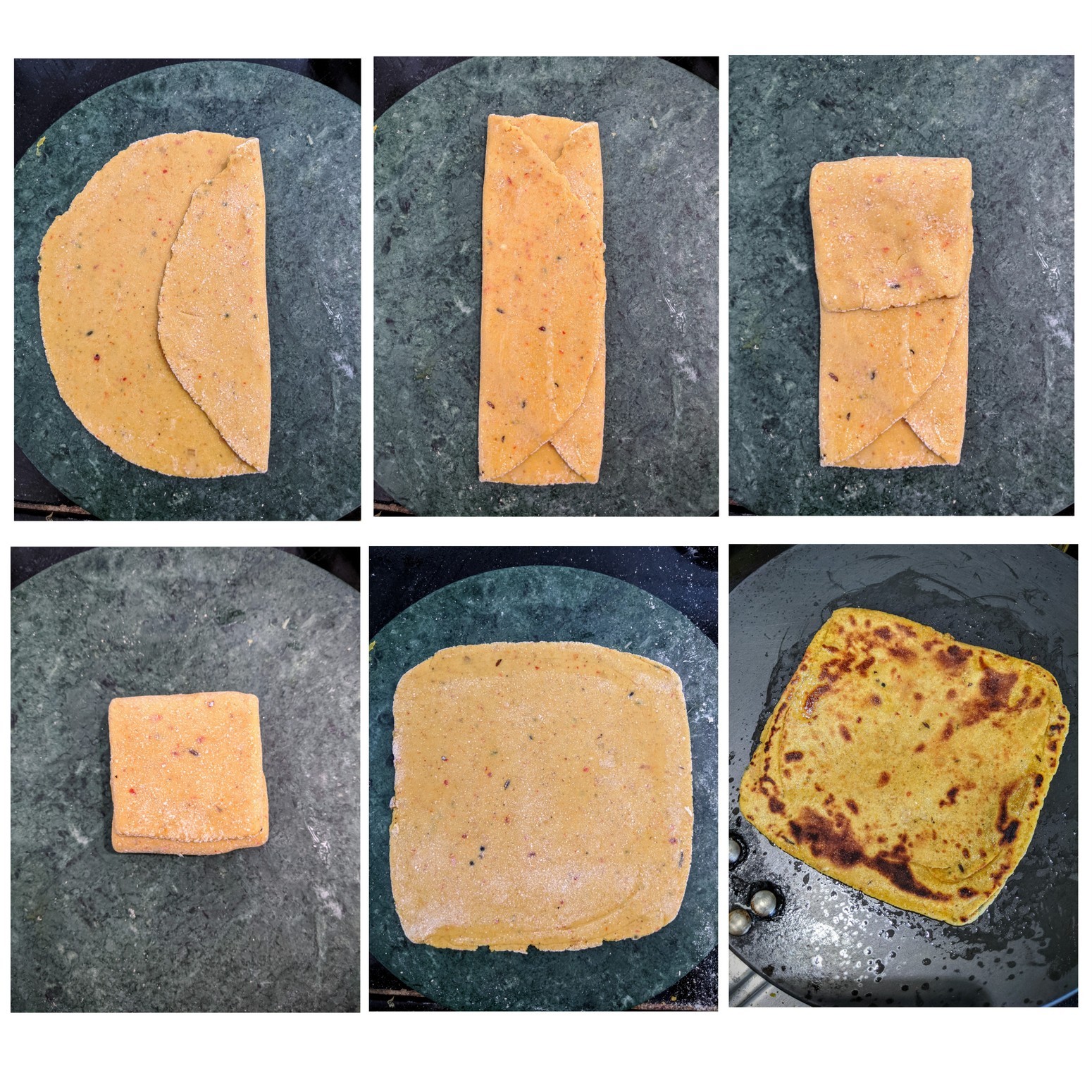 Thanks for your visit and see you soon again with another exciting recipe!