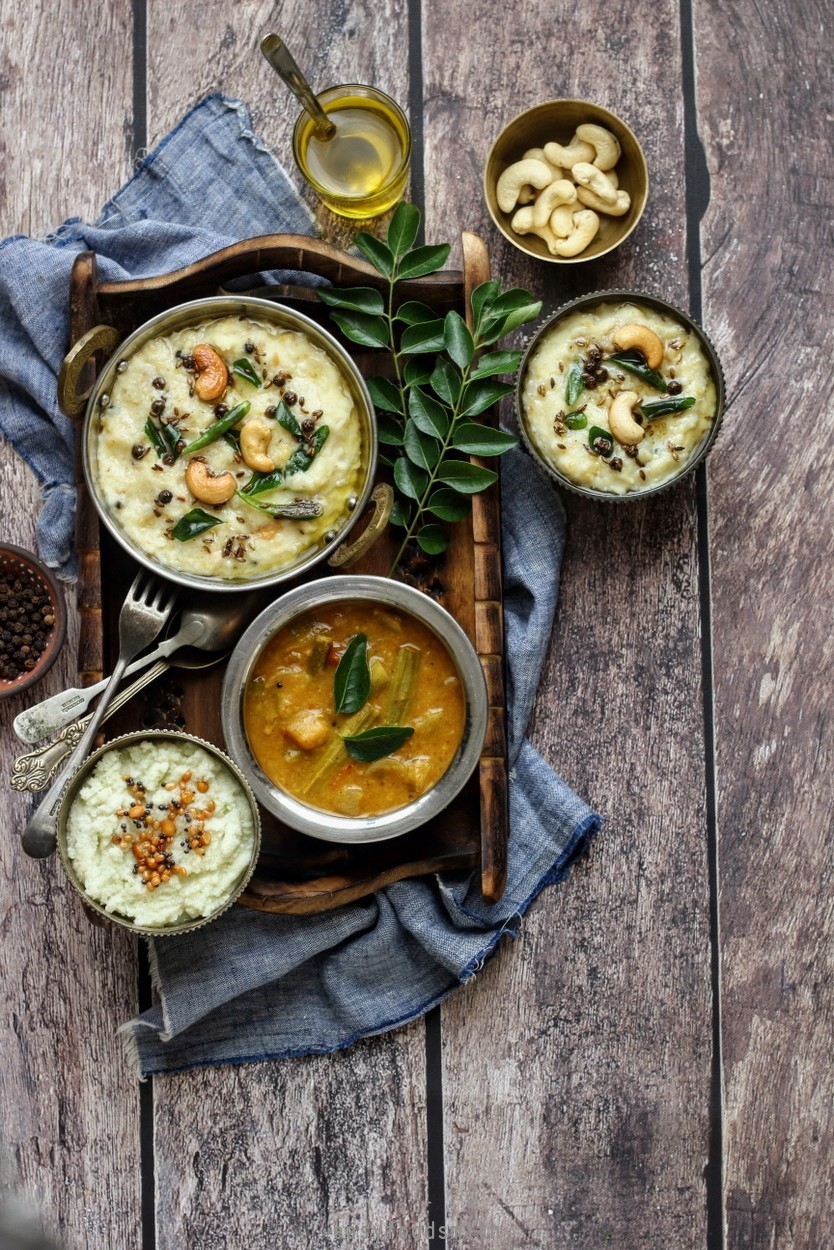 Had planned of sharing a dessert post for the festival of Makar Sankranti, however, my savoury tooth led me to sharing a savoury dish instead. Pongal is a dish which is made especially on this occasion in the southernmost state of Tamil Nadu. Although it is relished for breakfast and also as a meal with accompaniments of coconut chutney and a vegetable & lentil stew called sambar. My favourite way of enjoying it, is with the spicy and tangy kathirikai gothsu (a spicy and tangy brinjal chutney) I believe it tastes best with the gothsu.

The beauty of the dish lies in its simplicity – not only in its preparation but also its flavours. They are simple, clean flavours and I will, without a second thought, label it as comfort food. It is also a dish that you can make and enjoy on days when you are not in a mood to cook a regular meal. Pongal is quick to fix and it will provide you with a wholesome nourishing meal especially when you have it in winters since it has the goodness of ghee, whole black pepper and cumin. It has rice and dal which is a staple meal for most Indian families but cooked together, just like one does for making khichdi. Well, it is indeed khichdi of a kind but made the south Indian way. 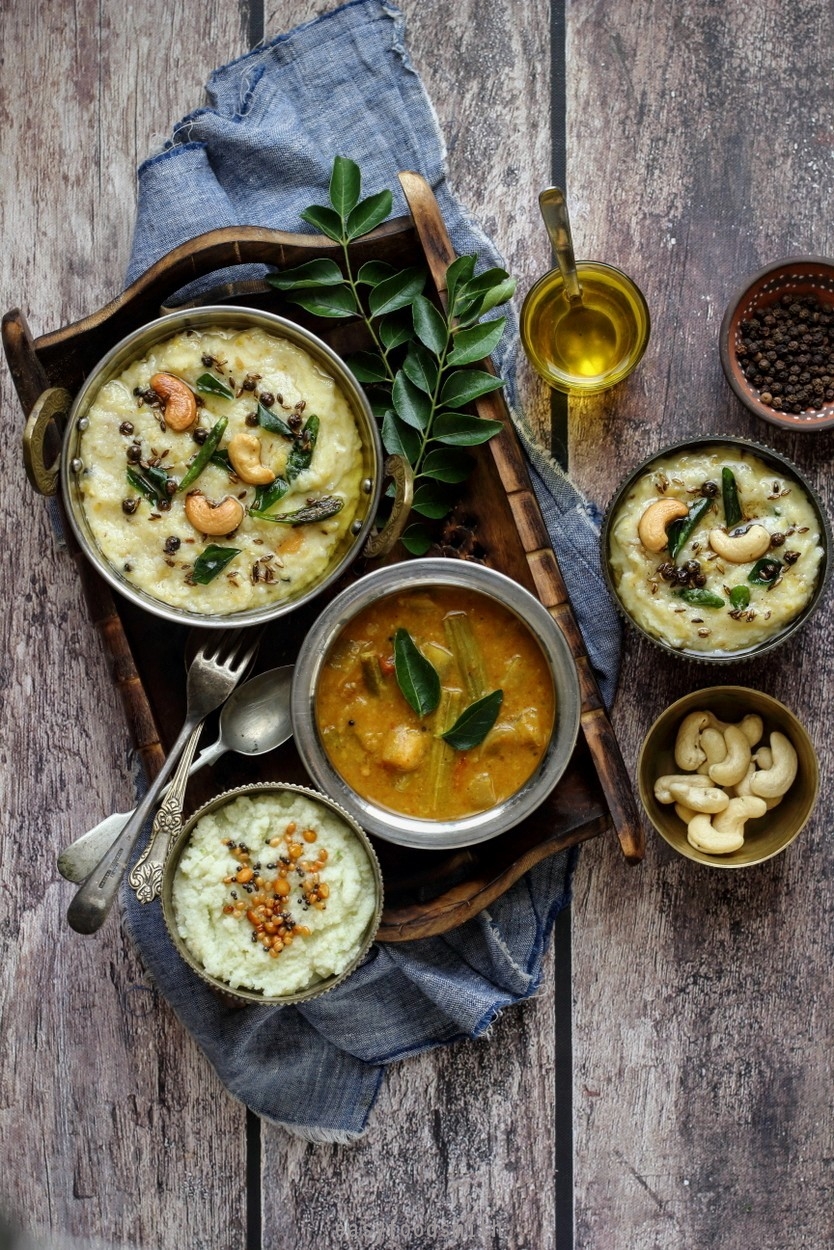 Before I take you to the recipe for the savory pongal, know that there is also a sweet pongal. Ven or khara pongal is the savory version of Pongal. The sweet version is called chakkara or sakkarai pongal. Will probably share that sometime later.

Mostly small variety of rice such as sona masuri or seeraga samba is used for making pongal. I used gobind bhog variety since it is small grain and also fragrant just like the seeraga samba rice.  In fact I was told the samba rice is called gobind bhog in bengal so I believe they are probably the same or most likely belong to the same family. And, as such, I always use the gobind bhog rice for making khichdi. You can swap rice with quinoa or oats or even millet to make it healthier.

Veg Pongal is also called Ghee Pongal since it requires a substantial amount of ghee for a good textured porridge. Less amount of fat in the porridge would lead to the texture being claggy. I replace some amount of ghee with cold pressed oil for those who are not too enthusiastic about ghee so they can enjoy a lighter version. Having said that, for a richer and tasty pongal you need to use ghee. Vegans of course can swap it with oil of their choice or use vegan butter. The ratio of dal to rice and the amount of water is also dependent on what kind of texture you prefer. 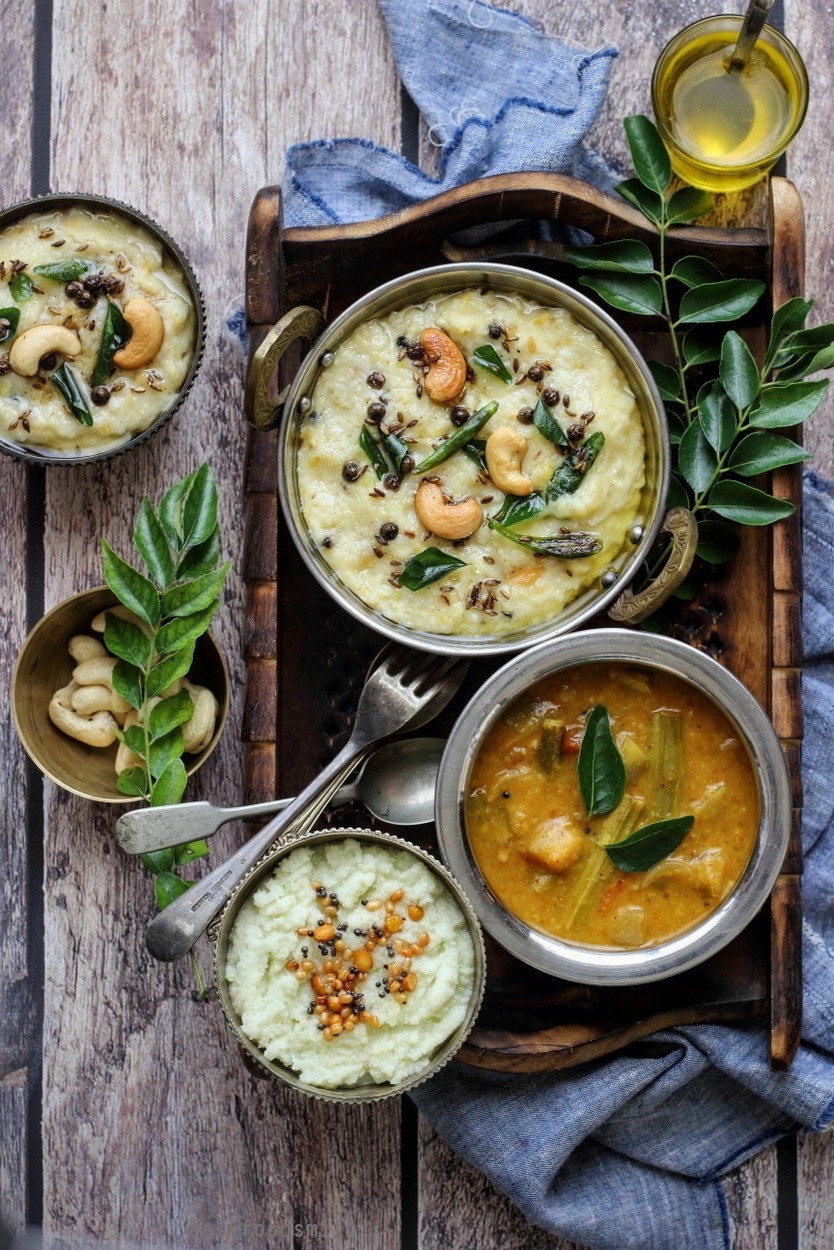 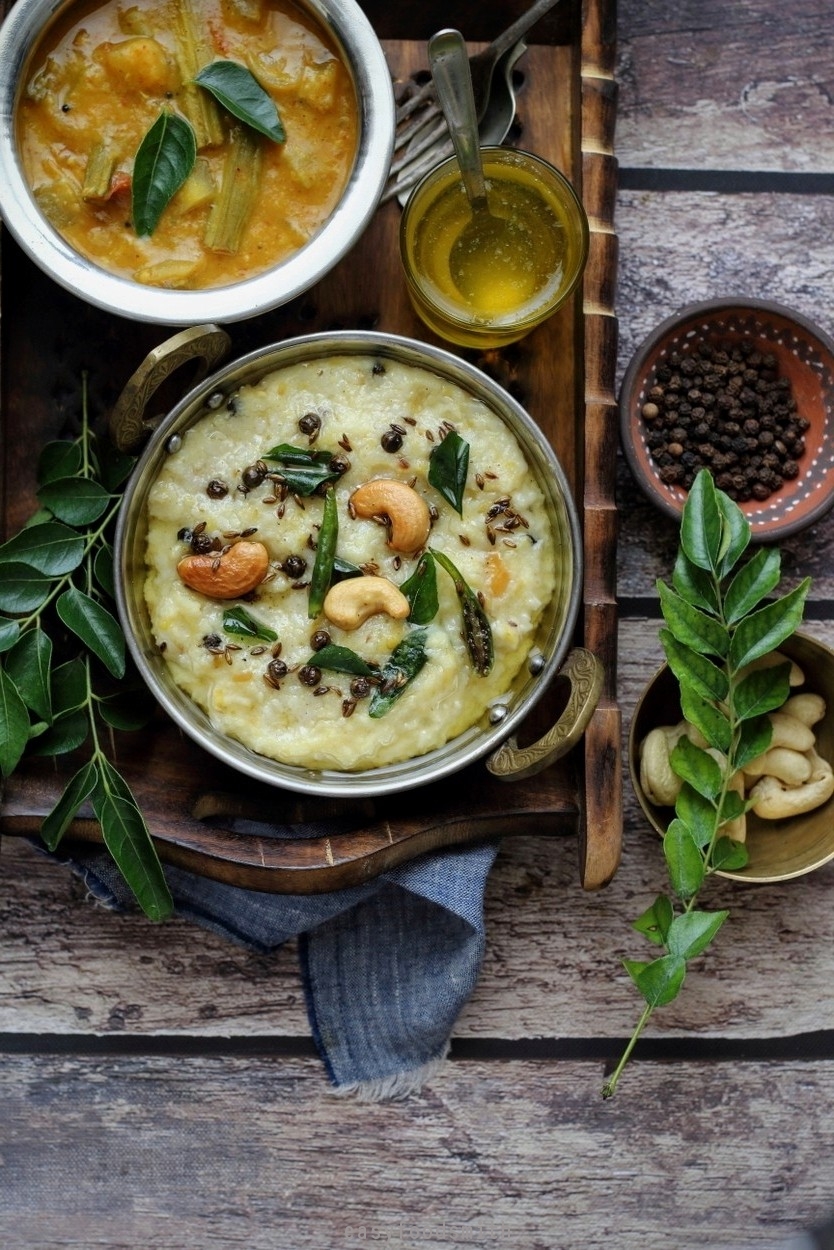 In a small pan, roast the dal till it becomes fragrant and just about begins to change the colour.

Switch off the heat and transfer the dal into a bowl.

Add rice to the dal and wash them three to four times in regular water. Discard the water. Transfer the dal and rice to the pressure cooker and add water, salt, ginger and black peppercorns.

Pressure cook on high heat till the pressure cooker releases three pressure whistles. (I live at a low elevation near the sea so it takes me less time to pressure cook food. Adjust the amount accordingly. Also keep in mind the cooking time will depend on the type of rice you are using for making the pongal)

Let the pressure release on its own. Open the lid of the pressure cooker and stir the contents so that the rice and dal assimilate well.

Keep a frying pan on medium heat, add oil and ghee and once it begins to heat, add the cumin and pepper corns and allow the cumin to crackle. (Be watchful since the peppercorns have propensity to explode when fried. Therefore, keep stirring while frying them.)

Once the cumin begins to crackle, add asafoetida, cashews and keep stir frying till cashews turn golden in colour.

Immediately add the curry leaves and give a quick stir.

Switch off heat and add the tempering to the cooked rice and dal mix. Stir well and adjust seasoning.

Serve hot. The pongal tastes great on its own, served with just ghee. However, other delicious accompaniments to pongal are Coconut Chutney, Sambar and Kathirikai Gothsu.

(Adjust the amount of water keeping in mind that the pongal will thicken as it sits.)

Thank you so much for your visit and see you soon again with another exciting recipe!