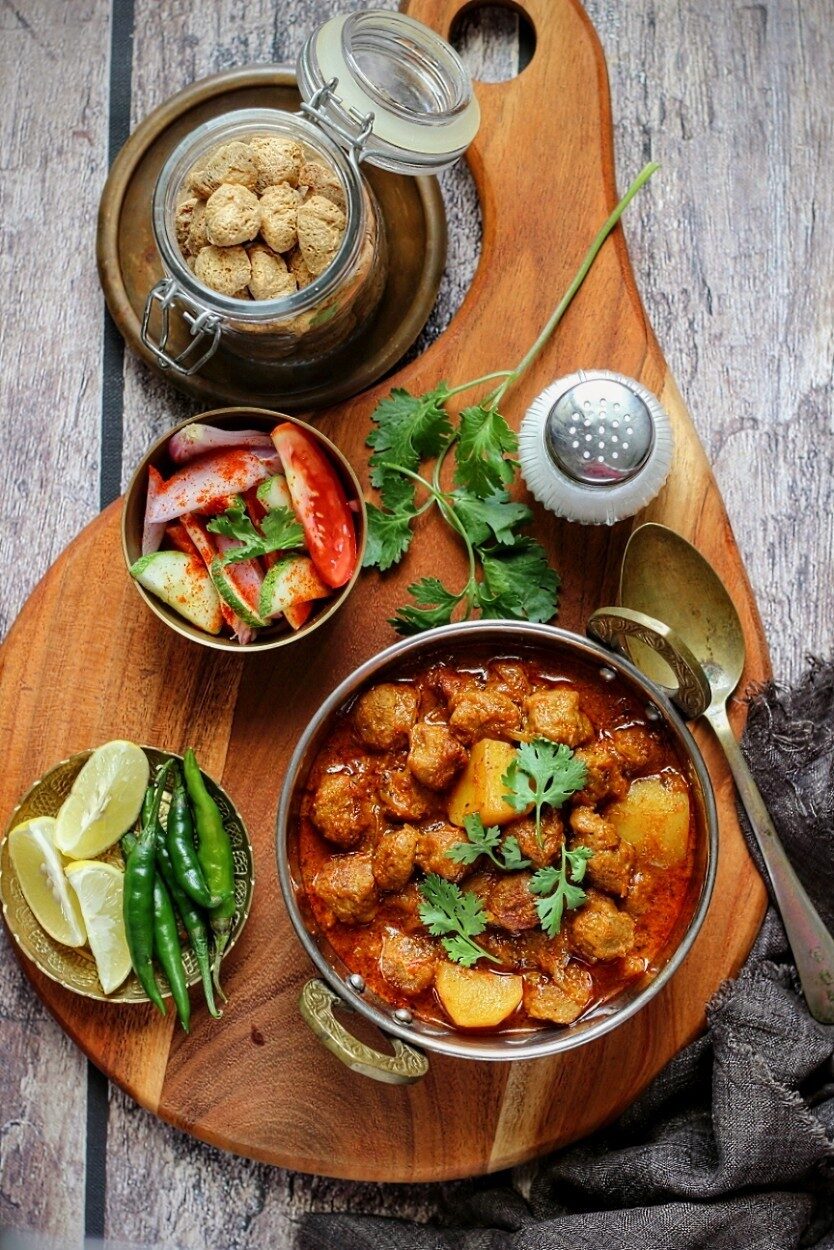 Today I am sharing a dish that used to be a staple at my university hostel mess. Since my uni had a strict vegetarian meal code, therefore we were served no meat or even eggs. However, by hostel standard, the guy who used to run our canteen served us pretty decent food which also included some finger licking worthy snacks. His bread pakoda with his signature chutney were especially noteworthy.

He used to keep this curry often on the menu; one, because soya is rich in protein and second because it was kind of meat substitute for the meat eaters since it closely resembles meat in its texture and it’s a bit close-to even in taste. We girls used to look forward to the soya curry days and my roommate and I especially used to love this curry.

Meat eater or not, try this delicious curry that is packed with flavours and takes under 30 minutes to be ready. I have in the past shared two recipes of soya, one that was made using soya nuggets or soya chunks and the other made with minced soya, also called soya granules.

Both are worth trying and both have an extremely different flavour profile. One happens to have south East Asian flavours while the other is a popular spicy south Indian snack. Do check them out, I have provided the link to both the recipes towards the end of this post. 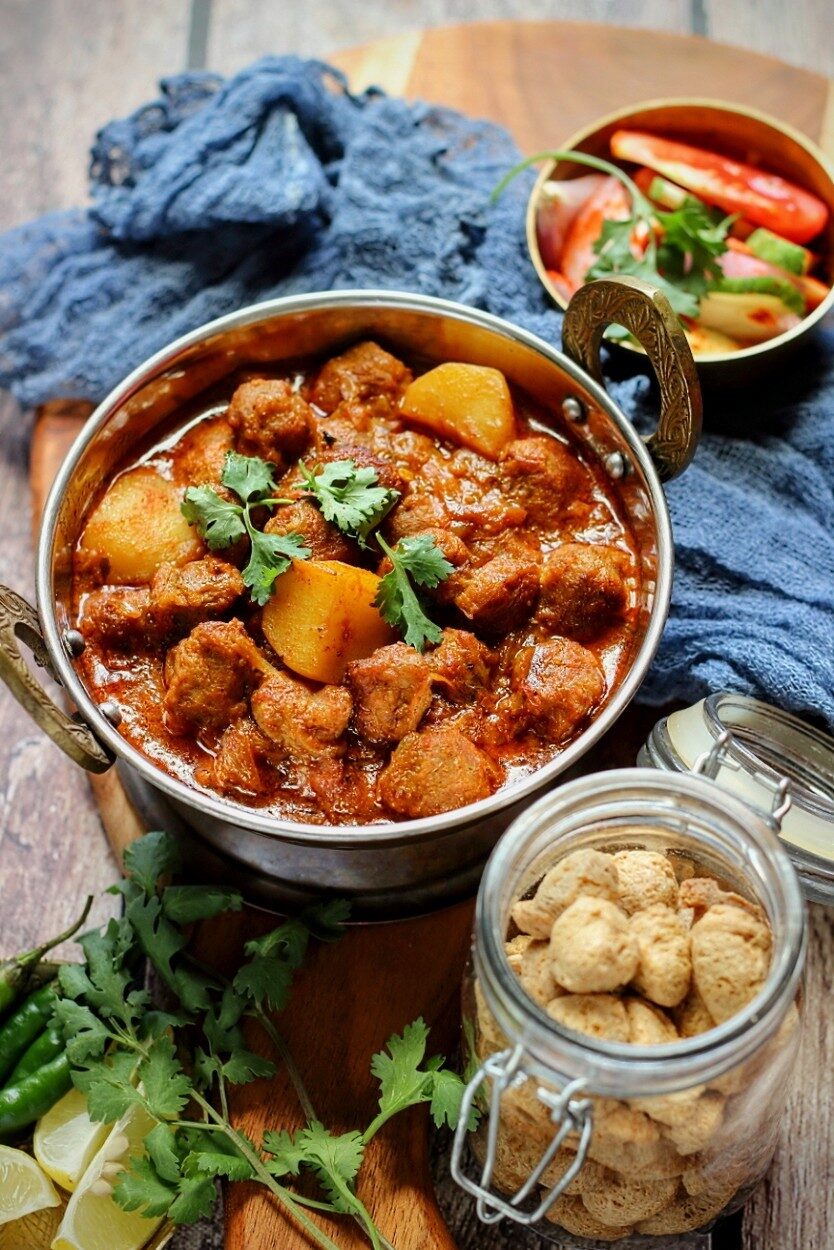 Or you can use ½ tsp of Degi Mirch 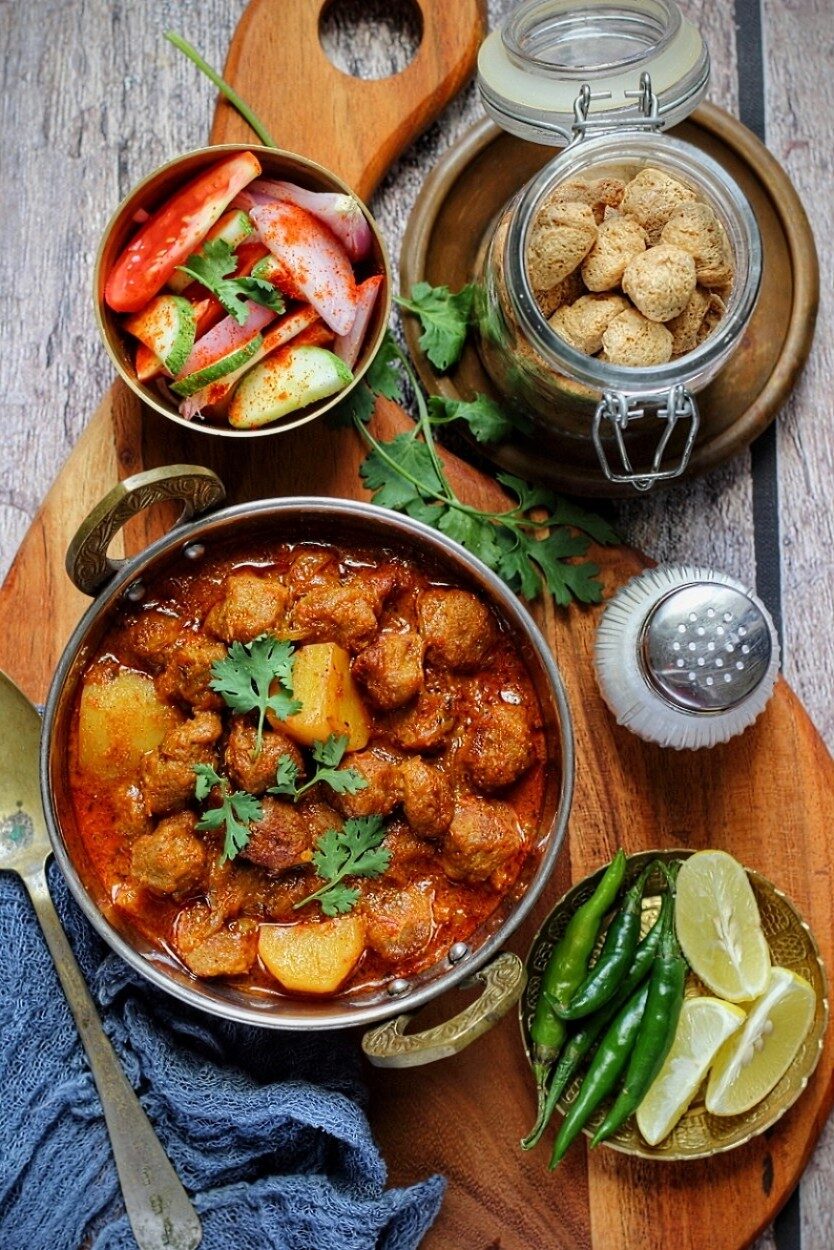 Heat two and a half to three cups of water in a sauce pan and add add the soya nuggets along with salt and garam masala. Cook the soya for five minutes and then switch off the heat. Leave it in water for a minute and then drain the water and wash the soya in fresh water for two three times. Once it is cool, squeeze excess water and set aside.

Mix all the ingredients mentioned under the marination heading and add it to the soya and mix everything well. Set aside for twenty to thirty minutes. Heat oil in a frying pan or small kadahi and fry the soya, in batches, till it turns light golden brown. Remove on absorbent sheet or tissue and set aside.

Using a mortar and pestle, grind to together the ginger, garlic and green chilli. Set aside.

Heat the oil (if using the mustard oil, ensure to smoke it well else the curry will be smelly) and add bay leaves followed by sliced onions. Fry till the onions on high heat, stirring often, till they turn golden brown. Add two tablespoon of water. Stir and then add ginger garlic chilli paste. Reduce heat to medium, stir and cook till the paste is no longer raw and turns golden brown in colour. Do not stop stirring while cooking the contents else they will catch at the bottom.

Reduce heat and add salt, red chilli powder, turmeric powder, coriander powder and garam masala. Stir for a few seconds and then add pureed tomato. Cook till the tomato is cooked and begins to leave oil around the edges.

Stir in the kasoori methi and roasted cumin powder, followed by cream (it is optional).

Add two to three tablespoons of water and add the potatoes. Increase heat to high and stir the contents for fifteen to twenty seconds. Add the fried soya nuggets and one plus one-fourth cup of water and pressure cook till one pressure whistle escapes. Switch off the heat and allow the pressure to release on its own.

Adjust the amount of water and seasoning as required. Serve garnished with chopped coriander leaves and roti or naan. If you wish to have it with rice, you will have to increase the amount of water since the nuggets and potatoes will absorb water as they sit. 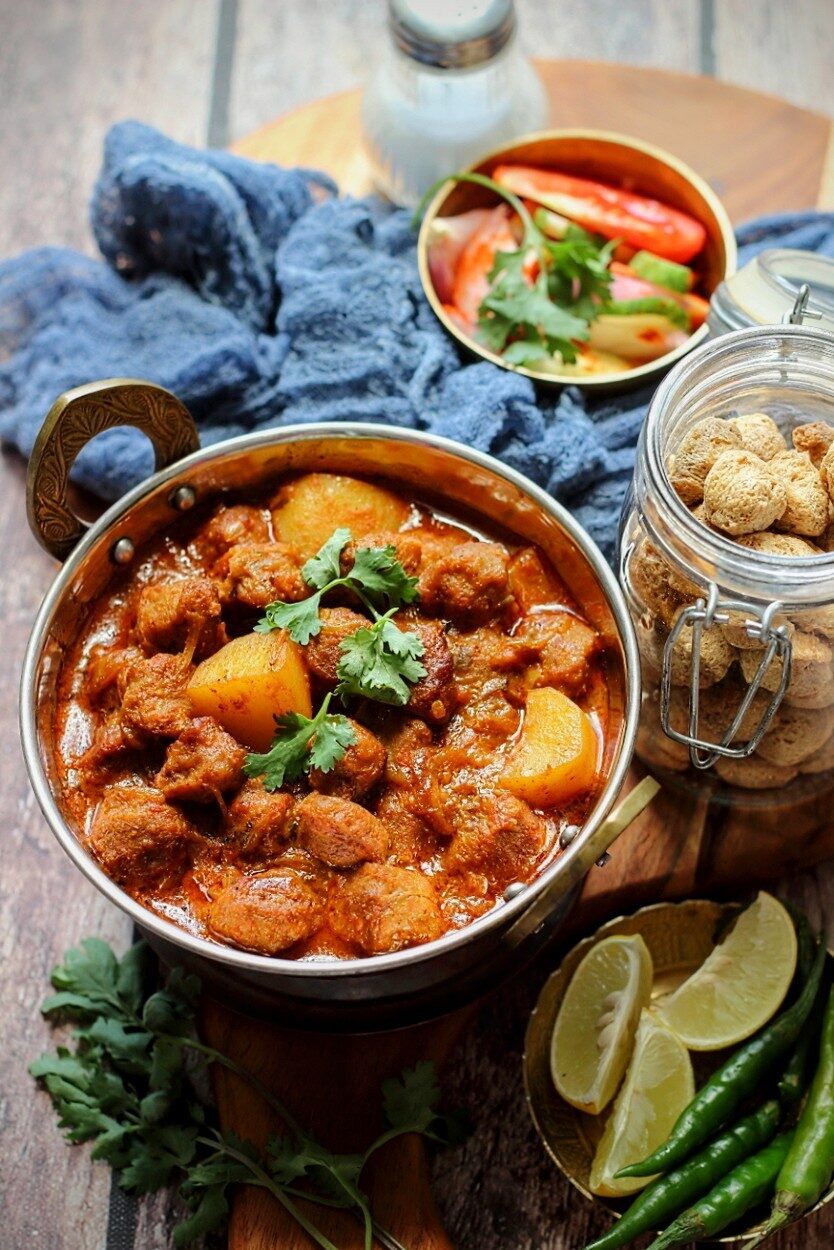 Thank you for your visit and see you soon again, with another exciting recipe!